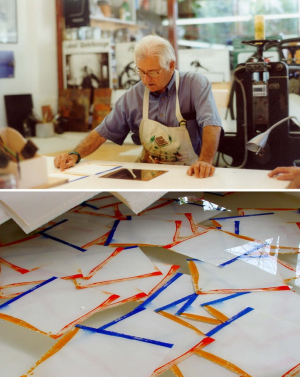 In 1940 his family moved to Sabadell, where he Alfons Borrell live since he was 9 years old. After several casual jobs in 1950, completed his military service in Port de Pollença (Mallorca), where he attended the workshop of Hermen Anglada Camarasa.  Back in Sabadell in 1952, he worked in the family jewelry store. In Barcelona, he made two free courses in life drawing at the Escola de Belles Arts de Sant Jordi drawing school; where in 1953 he met who would become his wife, Rosa. In 1955 Borrell evolved from the figurative to abstract painting. The same year, he participated with Joaquim Montserrat in the creation of the Sala d’Art Actual Art Gallery in Sabadell and helped to create the Academy of Fine Arts of Sabadell. In 1957 and worked in the Riutort magazine directed by Andreu Castells, in Sabadell. In 1959 he met Juan-Eduardo Cirlot, which he later devoted an essay.

In 1969 he joined the Grup Gallot (Gallot Group) with Antonio Angle, Llorenç Balasch i Grau, Joan Josep Bermúdez, Manuel Duque, Josep Llorens, Joaquim Montserrat and Lluís Vila Plana following the current of the action painting, which various perform actions on the street, both in Sabadell and Barcelona. Invited by the art critic Alexandre Cirici-Pellicer, he participated in the inaugural exhibition of the first Barcelona Museum of Contemporary Art at the top of Cinema Coliseum in Barcelona.