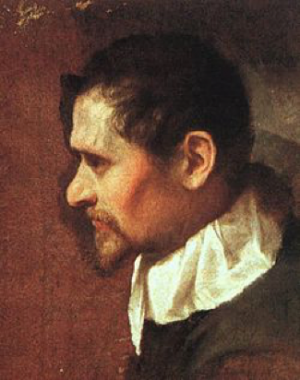 Annibale Carracci was born in Bologna, and in all likelihood was first apprenticed within his family. In 1582, Annibale, his brother Agostino and his cousin Ludovico opened a painters’ studio, initially called by some the Academy of the Desiderosi (desirous of fame and learning) and subsequently the Incamminati (progressives). While the Carraccis laid emphasis on the typically Florentine linear draftsmanship, as exemplified by Raphael and Andrea del Sarto, their interest in the glimmering colors and mistier edges of objects derived from the Venetian painters, notably the works of Tirian, which Annibale and Agostino studied during their travels around Italy in 1580–81. This eclecticism was to become the defining trait of the artists of the Baroque Emilian or Bolognese School.

In many early Bolognese works by the Carraccis, it is difficult to distinguish the individual contributions made by each. For example, the frescoes on the story of Jason for Palazzo Fava in Bologna (c. 1583–84) are signed Carracci, which suggests that they all contributed. In 1587–88, Annibale is known to have had travelled to Parma and then Venice, where he joined his brother Agostino. From 1589 to 1592, the three Carracci brothers completed the frescoes on the Founding of Rome for Palazzo Magnani in Bologna. By 1593, Annibale had completed an altarpiece, Virgin on the throne with St John and St Catherine. His Resurrection of Christ also dates from 1593. In 1592, he painted an Assumption for the Bonasoni chapel in San Francesco. During 1593-94, all three Carraccis were working on frescoes in Palazzo Sampieri in Bologna.

Based on the prolific and masterful frescoes by the Carracci in Bologna, Annibale was recommended by the Duke of Parma to his brother, the Cardinal Odoardo Farnese, who wished to decorate the piano nobile of the Roman Palazzo Farnese. In November–December of 1595, Annibale and Agostino traveled to Rome to begin decorating the Camerino with stories of Hercules, appropriate since the room housed the famous Greco-Roman antique sculpture of the hypermuscular Farnese Hercules.

Throughout the 17th and 18th centuries, the Farnese Ceiling was considered the unrivaled masterpiece of fresco painting for its age. They were not only seen as a pattern book of heroic figure design, but also as a model of technical procedure.

On July 8, 1595, Annibale completed the painting of San Rocco distributing alms. Other significant late works painted by Carracci in Rome include Domine, Quo Vadis? (c. 1602), which reveals a striking economy in figure composition and a force and precision of gesture that influenced on Poussin and through him, the language of gesture in painting.

Carracci was remarkably eclectic in thematic, painting landscapes, genre scenes, and portraits, including a series of auto-portraits across the ages. He was one of the first Italian painters to paint a canvas wherein landscape took priority over figures, such as his masterful The Flight into Egypt; this is a genre in which he was followed by Domenichino (his favorite pupil) and Claude Lorrain.