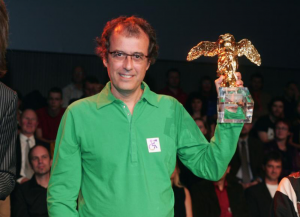 Antoni Abad i Roses (Lleida, 1956) is a Spanish artist. Based on the sculpture he evolved over time towards video art and later in net.art and other forms of new media.

Son of the sculptor Antonio Abad Gil and poet Teresa Rosas, the artistic training Antoni Abad is the fruit of the teaching of his father, complemented with a degree in Art History from the University of Barcelona (1979), and studies of Engraving Cuenca, London and Perugia. His work has evolved rapidly, moving away from traditional sculptural concepts to the use of new technologies, field in which he has become one of the most renowned Catalan creators. He moved also from photography to video art, followed by interest in computers Net.art. He uses Internet as a creative & research platform. The work of Antoni Abad expresses the desire to formal experimentation around the concepts of space and time, always present in his work, not exempt lately of certain ironic and critical aspects.

Some of his most important exhibits:

Premi d’Arts Plàstiques Medalla Morera (medal) 1990
Premi Ciutat de Barcelona (City of Barcelona Prize) in the category of Multimedia (2002) for his work Z, shown in Metrònom and Centre d’Art Santa Monica
Golden Nica at Ars Electronica[3] within the category of virtual communities in 2006. Considered the most important prize in the world in terms of art and new technologies.
Premi Nacional d’Arts Visuals (National Prize for Visual Arts) in 2006 given by the Government of Catalonia.