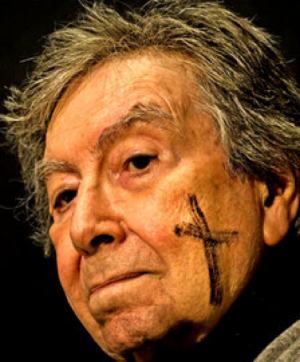 Antoni Tàpies i Puig, (13 December 1923 – 6 February 2012) was a Catalan painter, engraver, sculptor and art theorist, who became one of the most famous European artists of his generation.

Tàpies was perhaps the best-known Catalan artist to emerge in the period since the World War II. He first came into contact with contemporary art as a teenager through the magazine D’Ací i D’Allà, published in Barcelona, and during the Spanish Civil War (1936–39), while he was still at school, he taught himself to draw and paint. On a French government scholarship in the early 1950s he lived in Paris, to which he often returned.

In 1948, Tàpies helped co-found the first Post-War Movement in Spain known as Dau al Set which was connected to the Surrealist and Dadaist Movements. The movement also had a publication of the same name, Dau al Set. Tàpies started as a surrealist painter, his early works were influenced by Paul Klee and Joan Miró; but soon become an informal artist, working in a style known as pintura matèrica, in which non artistic materials are incorporated into the paintings. In 1953 he began working in mixed media; this is considered his most original contribution to art.

Tàpies’ international reputation was well established by the end of the 1950s. From the late 1950s to early 1960s, Tàpies worked with Antonio Saura, Manolo Millares and many other Spanish Informalist artists. In 1966 he was arrested at a clandestine assembly at the University of Barcelona; his work of the early 1970s is marked by symbols of Catalan identity.  From about 1970 (influenced by Pop art) he began incorporating more substantial objects into his paintings, such as parts of furniture.

Among the artists’ work linked in style to that of Tàpies is that of the American painter Julian Schnabel as both have been connected to the art term “Matter”.

Alongside his production of pictures and objects, from 1947 onward Tàpies was active in the field of graphic work. He produced a large number of collector’s books and dossiers in close association with poets and writers such as Alberti, Brossa, Dupin, Foix, Gimferrer, Guillén, Mestres Quadreny, Paz, Saramago, Valente and Zambrano.

In Tàpies’s graphic work, he is interested with the materiality of a piece. He gravitates toward avoiding traditional processes and uses everyday imagery such as handprints and footprints as his subject matter. Tàpies enjoyed working with the concepts such as “high” art and “low” art. He uses embossing, flocking, and indentations with carborundum to help in defining the flatness of printmaking. He involves much painting, drawing, and collage in his prints as well as a number of earthy materials such as straw, sand, and dirt. To achieve the innovative techniques, Tàpies worked with specific publishers and printmakers who were inspired by his unique, groundbreaking ideas. It was very important to Tàpies for his work to reach a wider range of people. His graphic work, was therefore quite important to him in this aspect.