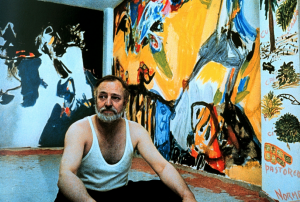 Asger Oluf Jorn (3 March 1914 – Aarhus, Denmark, 1 May 1973) was a Danish painter, sculptor, ceramic artist, and author. He was a founding member of the avant-garde movement COBRA and the Situationist International. He was born in Vejrum, in the northwest corner of Jutland, Denmark, and baptized Asger Oluf Jørgensen.

While at college he joined the small Silkeborg branch of the Communist Party of Denmark and came under the direct influence of the syndicalist Christian Christensen.

In 1936 he traveled to Paris to become a student of Kandinsky. However, when he discovered that Kandinsky was having economic difficulties, barely able to sell his own paintings, Jorn decided to join Fernand Léger’s Académie Contemporaine, it was during this period that he turned away from figurative painting and to abstract art. In 1937 he joined Le Corbusier in working on the 1937 Paris Exhibition. From 1937 to 1942, he studied at the Royal Danish Academy of Fine Arts in Copenhagen.

The occupation of Denmark by Nazi Germany was a time of deep crisis for Jorn, who had been deeply inculcated with pacifism, initially sinking him into deep depression. He subsequently became active in the communist resistance movement. After the war, he complained that opportunities for critical thinking within the context of the communist arena had been curtailed by what he characterized as a centralized bourgeois political control. Finding this unacceptable, he broke with the Danish Communist Party, although he did not hand in his membership until the mid-1960s and remained committed philosophically to a revision of the Marxist analysis of capitalism from the point of view of the artist.

In 1954 he met Guy Debord, who was to become a close friend. The two men collaborated on two artist’s books, Fin de Copenhagen (1957) and Mémoires (1959), along with prints, and forewords to each other’s work.

He participated in the conference that led to the merger of the International Movement for an Imaginist Bauhaus, the Lettriste Internationale, and London Psychogeographical Association to form the Situationist International in 1957. Jorn never believed in a conception of the Situationist ideas as exclusively artistic and separated from political involvement. In 1961 he amicably quit his activity in the SI, still fully supporting its contents and goals, and continuing to support it financially, but believing that the new strategy of the SI was ineffective.

He went on to found the Scandinavian Institute of Comparative Vandalism in Silkeborg and contributed material to the Situationist Times. He traveled again to France where he, together with Christian Dotremont and Constant, founded COBRA (a European avant-garde art movement), and edited monographs of the Bibliothèque Cobra.

During the course of his artistic career he produced over 2,500 paintings, prints, drawings, ceramics, sculptures, artist’s books, collages, décollages, and collaborative tapestries.