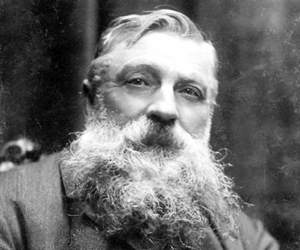 François Auguste René Rodin (12 November 1840 – 17 November 1917), known as Auguste Rodin, was a French sculptor. Although Rodin is generally considered the progenitor of modern sculpture, he did not set out to rebel against the past. He was schooled traditionally, took a craftsman-like approach to his work, and desired academic recognition, although he was never accepted into Paris’s school of art.

Sculpturally, Rodin possessed a unique ability to model a complex, turbulent, deeply pocketed surface in clay. Many of his most notable sculptures were roundly criticized during his lifetime. They clashed with predominant figurative sculpture traditions, in which works were decorative, formulaic, or highly thematic. Rodin’s most original work departed from traditional themes of mythology and allegory, modeled the human body with realism, and celebrated individual character and physicality. Rodin was sensitive to the controversy surrounding his work, but refused to change his style.

From the unexpected realism of his first major figure – inspired by his 1875 trip to Italy- to the unconventional memorials whose commissions he later sought, Rodin’s reputation grew, such that he became the preeminent French sculptor of his time. By 1900, he was a world-renowned artist.

Rodin was a naturalist, less concerned with monumental expression than with character and emotion. Departing with centuries of tradition, he turned away from the idealism of the Greeks, and the decorative beauty of the Baroque movement. His sculpture emphasized the individual and the concreteness of flesh, and suggested emotion through detailed, textured surfaces, and the interplay of light and shadow. To a greater degree than his contemporaries, Rodin believed that an individual’s character was revealed by his physical features.

Rodin’s talent for surface modeling allowed him to let every part of the body speak for the whole. The male’s passion in The Thinker is suggested by the grip of his toes on the rock, the rigidness of his back, and the differentiation of his hands. Speaking of The Thinker, Rodin illuminated his aesthetic: “What makes my Thinker think is that he thinks not only with his brain, with his knitted brow, his distended nostrils and compressed lips, but with every muscle of his arms, back, and legs, with his clenched fist and gripping toes.”

Sculptural fragments to Rodin were autonomous works, and he considered them the essence of his artistic statement. His fragments – perhaps lacking arms, legs, or a head – took sculpture further from its traditional role of portraying likenesses, and into a realm where forms existed for their own sake.

Rodin saw suffering and conflict as hallmarks of modern art. Charles Baudelaire echoed those themes, and was among Rodin’s favorite poets. Rodin enjoyed music, especially the composer Gluck, and wrote a book about French cathedrals. He owned a work by the as-yet-unrecognized Van Gogh, and admired the forgotten El Greco.