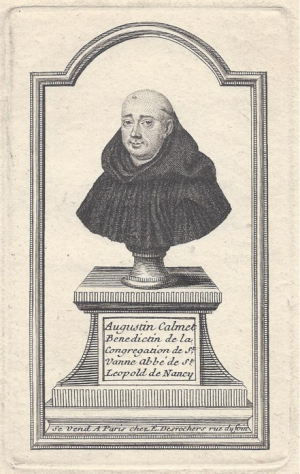 Calmet was a pious monk as well as a learned man, and one of the most distinguished members of the Congregation of St. Vanne. In recognition of these qualities he was elected prior of Lay-Saint-Christophe in 1715, Abbot of St-Léopold at Nancy in 1718, and of Senones Abbey in 1729. He was twice entrusted with the office of Abbot General of the congregation. Pope Benedict XIII wished to confer episcopal dignity upon him, but his humility could not be brought to accept the honor. Calmet was greatly admired by the philosopher Voltaire, who visited the abbey on several occasions.

Calmet was educated at the Benedictine priory of Breuil and in 1688 joined the same Order at the Abbey of Saint-Mansuy at Toul, where he was admitted to profession on the following year. After his ordination, he was appointed to teach philosophy and theology at the Abbey of Moyenmoutier. Here, he began to gather the material for his commentary of the Bible, which he completed at Munster in Alsace where he was sent in 1704 as sub-prior and professor of Biblical exegesis.

In the meanwhile he had prepared two other works closely connected with Biblical exegesis: (1) Histoire de l’Ancien et du Nouveau Testament et des Juifs (Paris, 1718), translated into English, German and Latin; (2) Dictionnaire historique, critique, chronologique, géographique et littéral de la Bible (Paris, 1720, 2 vols.). An improved and enlarged edition in 4 volumes was published in 1730, which has several times been reprinted, Encyclopédie théologique, I-IV. It, too, was translated into Latin and other European languages.

His two-volume study “Treaty on the Apparitions of spirits and Vampires, or ghosts of Hungary, Moravia, & c.”, published in 1751, ambiguously considered the possibility of the existence of vampires, although not stating it explicitly.

Tower and Plan of Babel