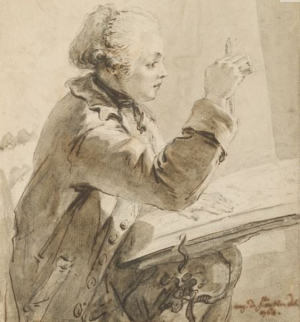 Augustin de Saint-Aubin was born on 3 January 1736 in Paris to the king’s embroiderer Gabriel Germain de Saint-Aubin (1696-1756). He came from a family of artists and designers, which included his six siblings: brothers Charles-Germain and Gabriel-Jacques de Saint-Aubin, as well as Catherine Louise, Louis-Michel, Athanasius, and Agathe, who were collectively known as the “Book of Saint-Aubin”.

Trained by his brother, he later studied with Étienne Fessard, Nicolas-Henry Tardieu and Laurent Cars. His first submission to the Salon was an etching in 1752. He was approved by the Académie Royale de Peinture et de Sculpture in 1771, but did not graduate, as he failed to submit one of the required reception pieces. He took many commissions for commercial purposes like bookplates, frontpieces, invitations, tradesmen’s cards, and programs, but also illustrated books such as the Decameron by Boccaccio.

In 1776 he was appointed as the official engraver at the Bibliothèque Royale (Royal Library). He later worked on etching the collection of antique gems owned by the Duc d’Orléans. Emmanuel Bocher’s 1879 catalog contains over 1300 works by Augustin, but he is most remembered for his portraits and his engravings of portraits by Charles-Nicolas Cochin the younger (1715-1790). In his lifetime, Augustin was considered the most successful of the siblings, but he is the one about whom least is now known.

Inauguration of the equestrian statue of