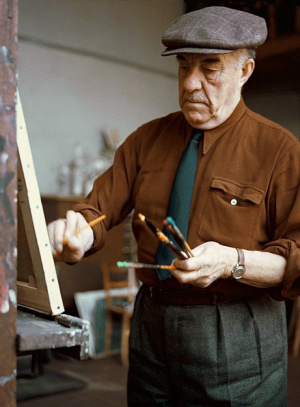 Joseph Fernand Henri Léger (February 4, 1881 – August 17, 1955) was a French painter, sculptor, and filmmaker. In his early works he created a personal form of cubism which he gradually modified into a more figurative, populist style. His boldly simplified treatment of modern subject matter has caused him to be regarded as a forerunner of pop art.

Fernand Léger initially trained as an architect from 1897 to 1899, before moving in 1900 to Paris, where he supported himself as an architectural draftsman. In 1902–1903, he enrolled at the School of Decorative Arts after his application to the École des Beaux-Arts was rejected. He nevertheless attended the Beaux-Arts as a non-enrolled student, spending what he described as “three empty and useless years” studying with Gérôme and others, while also studying at the Académie Julian. He began to work seriously as a painter only at the age of 25. At this point his work showed the influence of impressionism.. A new emphasis on drawing and geometry appeared in Léger’s work after he saw the Cézanne retrospective at the Salon d’Automne in 1907.

In 1909 he moved to Montparnasse and met such leaders of the avant-garde as Archipenko, Lipchitz, Chagall and Robert Delaunay. In 1911 the hanging committee of the Salon des Indépendants placed together the painters that would soon be identified as ‘Cubists’. Metzinger, Gleizes, Le Fauconnier, Delaunay and Léger were responsible for revealing Cubism to the general public for the first time as an organized group.

The “mechanical” works Léger painted in the 1920s, in their formal clarity as well as in their subject matter -the mother and child, the female nude, figures in an ordered landscape- are typical of the postwar “return to order” in the arts, and link him to the tradition of French figurative painting represented by Poussin and Corot.. In collaboration with Amédée Ozenfant he established a free school where he taught from 1924, with Alexandra Exter and Marie Laurencin. He produced the first “mural paintings”.

During World War II Léger lived in the United States. He taught at Yale University, and found inspiration for a new series of paintings in the novel sight of industrial refuse in the landscape. In his final years he lectured in Bern, designed mosaics and stained-glass windows for the Central University of Venezuela, Caracas.

Léger wrote in 1945 that “the object in modern painting must become the main character and overthrow the subject. If, in turn, the human form becomes an object, it can considerably liberate possibilities for the modern artist.” He elaborated on this idea in his 1949 essay, “How I Conceive the Human Figure”, where he wrote that “abstract art came as a complete revelation, and then we were able to consider the human figure as a plastic value, not as a sentimental value. That is why the human figure has remained willfully inexpressive throughout the evolution of my work“. As the first painter to take as his idiom the imagery of the machine age, and to make the objects of consumer society the subjects of his paintings, Léger has been called a progenitor of Pop art.