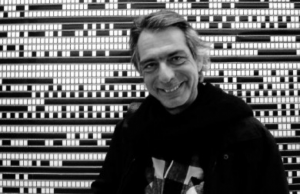 Frederic Amat (Barcelona, 1952) is a Catalan artist and scenarist.

Frederic Amat is a painter whose work defies a single form of categorization. His work has been exhibited and published all around the world. His open conception of painting led him to integrate multiple artistic languages in his creative work.

He has designed shows for dance and theater based on texts by García Lorca, Beckett, Juan Goytisolo, Koltès, and Octavio Paz. He has also directed and composed the scenic opera spaces of Sanchez Verdú’s  El viaje a Simorgh as well as the oratories of Oedipus Rex by Stravinsky/Cocteau and Maddalena ai piedi di Cristo by Caldara.

He also illustrated various works of literature such as The Thousand and one nights or the Odyssey. In his interventions in architectural spaces he has developed projects that combine painting, sculpture and ceramics: Mural de les Olles, Villanurbs, Pluja de Sang or Mur d’Ulls. In the same plural direction, he has extended painting to the field of cinematography on films such as Viaje a la luna, Foc al càntir, El Aullido, Danse Noire, and Deu Dits.