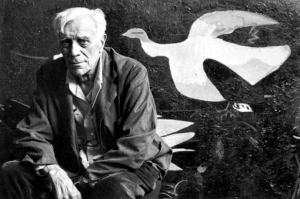 Georges Braque (Argenteuil-sur-Seine, 13 May 1882 – Paris, 31 August 1963) was a major 20th-century French painter, collagist, draughtsman, printmaker and sculptor. His most important contributions to the history of art were in his alliance with Fauvism from 1906, and the role he played in the development of Cubism. Braque’s work between 1908 and 1912 is closely associated with that of his colleague Pablo Picasso. Their respective Cubist works were indistinguishable for many years, yet the quiet nature of Braque was partially eclipsed by the fame and notoriety of Picasso.

Braque believed that an artist experienced beauty “… in terms of volume, of line, of mass, of weight, and through that beauty [he] interpret[s] [his] subjective impression…” He described “objects shattered into fragments… [as] a way of getting closest to the object…Fragmentation helped me to establish space and movement in space”. He adopted a monochromatic and neutral color palette in the belief that such a palette would emphasize the subject matter.

Although Braque began his career painting landscapes, during 1908 he, alongside Picasso, discovered the advantages of painting still lifes instead. Braque explained that he “… began to concentrate on still-lifes, because in the still-life you have a tactile, I might almost say a manual space… This answered to the hankering I have always had to touch things and not merely see them… In tactile space you measure the distance separating you from the object, whereas in visual space you measure the distance separating things from each other. This is what led me, long ago, from landscape to still-life”. A still life was also more accessible, in relation to perspective, than landscape, and permitted the artist to see the multiple perspectives of the object. Braque’s early interest in still lifes revived during the 1930s.

During the period between the wars, Braque exhibited a freer style of Cubism, intensifying his color use and a looser rendering of objects. However, he still remained committed to the cubist method of simultaneous perspective and fragmentation. In contrast to Picasso, who continuously reinvented his style of painting, producing both representational and cubist images, and incorporating surrealist ideas into his work, Braque continued in the Cubist style, producing luminous, other-worldly still life and figure compositions. By the time of his death in 1963, he was regarded as one of the elder statesmen of the School of Paris, and of modern art.