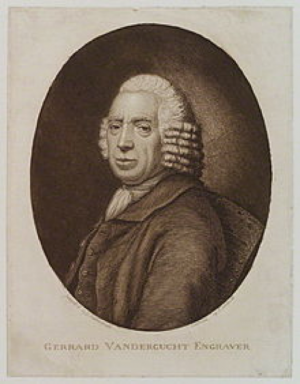 Vandergucht, born in London, the elder son of the Flemish engraver Michael van der Gucht. He was taught engraving by his father, as was his younger brother Jan van der Gucht (or John) (c.1699-c.1730). Gerard was also taught drawing by Louis Chéron, and studied at Godfrey Kneller’s Great Queen Street Academy. He surpassed the restrained style of engraving favored by his father, and became one of the leading engravers in London by adopting the French method of combining precise engraving with etched tones.

In 1719, he was commissioned by James Thornhill to engrave four designs for the cupola of St Paul’s Cathedral. He took over his father’s house – the Golden Head in Queen Street, Bloomsbury – following his father’s death in 1725. He married Mary Liney on 24 August, 1725. They had over 30 children, including the painter and picture dealer Benjamin van der Gucht.

He became a leading publisher of engraved prints and book illustrations, and taught Robert White and Francis Patton.

In 1735, he took a leading role in the artists’ demands for copyright protection which led to an extension of the provisions established by William Hogarth in the Engraving Copyright Act 1734. The 1734 act only protected original designs. Van der Gucht and his supporters successfully lobbied to extend copyright protection to cover all prints.

He concentrated on art dealing in the last 16 years of his life, selling prints, drawings, paintings and statues. He was a member of the Society for the Encouragement of Arts, Manufactures, and Commerce. He moved to Vandyke’s Head, Great Brook Street, in 1758, where he died in 1776.

Charles VI the Present Emperor of