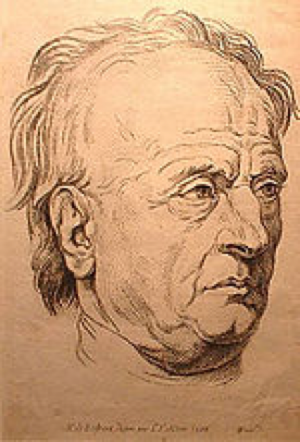 Germain Boffrand (Nantes, 16 May 1667 – Paris, 19 March 1754) was a French architect. A pupil of Jules Hardouin-Mansart, Boffrand was one of the main creators of the precursor to Rococo called the style Régence, and in his interiors, of the Rococo itself. In his exteriors he held to a monumental Late Baroque classicism with some innovations in spatial planning that were exceptional in France. His major commissions, culminating in his interiors at the Hôtel de Soubise, were memorialized in his treatise Livre d’architecture, published in 1745, which served to disseminate the French “Louis XV” style throughout Europe.

Boffrand went to Paris in 1681 to study sculpture in the atelier of François Girardon, before entering the large official practice of Jules Hardouin-Mansart. His uncle, Philippe Quinault, introduced him to prospective clients among the aristocracy of Paris and at Court. He was employed from 1689 on works in the Bâtiments du Roi under Mansart, notably at the Orangerie of Palace of Versailles and in Paris at Place Vendôme, where Boffrand was among the draughtsman responsible for the first designs and for the Convent of the Capuchins, Hôtel de Vendôme. From 1693 he was less employed and in 1699 he left the Bâtiments du Roi to commence work, at first in Lorraine and in the Netherlands, then after his return to Paris in 1709, for a distinguished private clientele in Paris, well disposed towards his audacious innovations, such as the oval forecourt of the Hôtel Amelot de Gournay (1710–13). In 1709, he was placed in charge of the interior apartments of the Hôtel de Soubise, where he soon succeeded the architect Pierre-Alexis Delamair (1676–1745). None of his early interiors survive, largely replaced by his spectacular Rococo work of the years following 1735.

Boffrand was received by the Académie d’architecture in 1709. In 1732, he was appointed inspecteur général des ponts et chaussées and produced plans for restructuring Les Halles. Named chief architect to the hôpital général in 1724, he constructed in the Île de la Cité the Hôpital des Enfants Trouvés (1727, demolished). Boffrand also worked for the hospitals at the Salpêtrière, at Bicêtre, and at the Hôtel-Dieu. He built a series of hôtels particuliers in Paris as speculative business enterprises.

Abroad, Boffrand worked for the Duke of Lorraine (not yet a part of France), where he was appointed Premier Architecte to Duke Léopold in 1711, but little of significance remains. He also constructed a fountain and a hunt pavilion, Bouchefort, in the gardens of the schloss belonging to the Elector of Bavaria, Maximilian II Emmanuel. In 1724 Boffrand worked on site at Würzburg with Balthasar Neumann, who had been consulting him in Paris, on the Prince-Bishop’s Residenz (under construction 1719-1744).

Boffrand’s folio, Livre d’architecture, was published in 1745. There are no surviving caches of his drawings. In January 1745 he was elected a Fellow of the Royal Society of London.