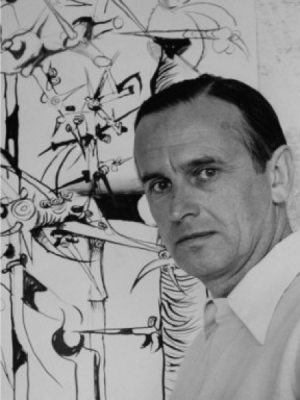 He was born in Streatham, London, attending Homefield Preparatory School, Sutton. He was then educated at Epsom College, Surrey and Goldsmiths, University of London. He worked as an engineer at the Midland Railway Works at Derby before studying engraving at Goldsmiths.

His early prints of pastoral subjects show the influence of Samuel Palmer, largely mediated by the older etcher, F.L. Griggs. He did not begin to paint in earnest until he was in his 30s, following the collapse of the print market in 1930 due to the Great Depression. These pieces are mainly landscapes, which show an affinity with the work of Paul Nash. Sutherland focused on the inherent strangeness of natural forms, and abstracting them, sometimes giving his work a surrealist appearance; in 1936 he exhibited in the International Surrealist Exhibition in London.

He also took up glass design, fabric design and poster design during the 1930s, and taught at a number of London art colleges. In 1934 he first visited Pembrokeshire and was profoundly inspired by its landscape, and the place remained a source for much of the following decade. In 1967 Sutherland returned to Wales and was once again inspired by the landscape, regularly working in the region until his death in 1980.

From 1940 Sutherland was employed as an official artist in World War II, as part of the War artist Scheme. He worked on the Home Front, depicting mining, industry, and bomb damage.

Sutherland converted to Catholicism in 1926, the year before his marriage to Kathleen Barry. In 1944 he was commissioned by Walter Hussey (then vicar of St Matthew’s Church, Northampton and an important patron of modern religious art) to paint The Crucifixion (1946) for St Matthew’s Church, Northampton.
In the early 1950s Sutherland was commissioned to design the tapestry Christ in Glory (1962) for Basil Spence’s new Coventry Cathedral.
He also continued to produce work based on natural forms, and managed to blend some of these – such as thorns – into his religious work. Sometimes, as in Head III (1953), these forms, often considered threatening in appearance, have an organic appearance but are entirely invented.

From 1947 into the 1960s his work was inspired by the south of France and he purchased a villa designed by the Irish Architect Eileen Gray at Menton in 1955.
The main Art & Design building at Coventry University is named after him.

Sutherland also painted a number of portraits, with one of Somerset Maugham (1949) the first and among the most famous. His painting of Winston Churchill (1954) was given to the subject and was then destroyed on the orders of Lady Churchill; studies for the portrait have survived.

Sutherland exhibited in the British Pavilion at the Venice Biennale in 1952 along with Edward Wadsworth and the New Aspects of British Sculpture Group.