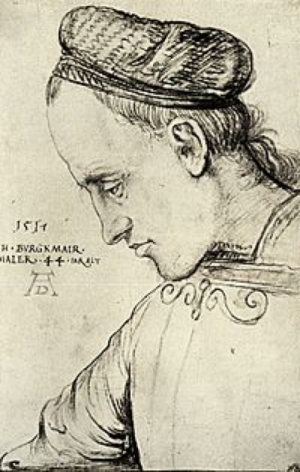 Hans Burgkmair the Elder (1473–1531) was a German painter and woodcut printmaker.

Burgkmair was born in Augsburg, the son of painter Thomas Burgkmair and his son, Hans the Younger, became one too. From 1488, he was a pupil of Martin Schongauer in Colmar, who died during his two years there, before Burgkmair completed the normal period of training. He may have visited Italy at this time, and certainly did so in 1507, which greatly influenced his style. From 1491, he was working in Augsburg, where he became a master and opened his own workshop in 1498.

Hollstein ascribes 834 woodcuts to him, mostly for book illustrations, with slightly over a hundred being “single-leaf”, that is prints not for books. The best of them show a talent for striking compositions, and a blend, not always fully successful, of Italian Renaissance forms and underlying German style.

From about 1508, he spent much of his time working on the woodcut projects of Maximilian I until the Emperor’s death in 1519. He was responsible for nearly half of the 135 prints in the Triumphs of Maximilian, which are large and full of character. He also did most of the illustrations for Weiss Kunig and much of Theurdank. He worked closely with the leading blockcutter Jost de Negker, who became in effect his publisher.

He was an important innovator of the chiaroscuro woodcut, and seems to have been the first to use a tone block, in a print of 1508. His Lovers Surprised by Death (1510) is the first chiaroscuro print to use three blocks, and also the first print that was designed to be printed only in color, as the line block by itself would not make a satisfactory image. Other chiaroscuro prints from around this date by Baldung and Cranach had line blocks that could be and were printed by themselves. He produced one etching, Venus and Mercury (c1520), etched on a steel plate, but never tried engraving, despite his training with Schongauer.

Burgkmair was also a successful painter, mainly of religious scenes and portraits of Augsburg citizens and members of the Emperor’s court. Many examples of his work are in the galleries of Munich, Vienna and elsewhere, carefully and solidly finished. His portraits suit modern taste better than his religious works.