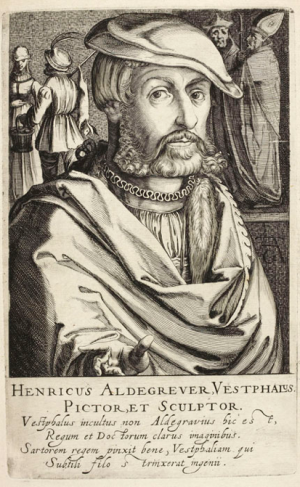 Heinrich Aldegrever or Aldegraf (1502–1555 or 1561) was a German painter and engraver. He was one of the “Little Masters”, the group of German artists making small old master prints in the generation after Dürer.

Painter, printmaker and goldsmith active in a Westphalia milieu. Born in Paderborn. His real name was Trippenmecker, which in Westphalian dialect means a clog-maker. It is not known where Aldegrever was taught. He probably worked in a workshop of one of the Soest goldsmiths. His early works show a strong Westphalian influence. Aldegrever made a journey to the Netherlands, where he became acquainted with works of Joos van Cleve, Barendt van Orley, Lucas van Leyden and Jacob Cornelisz.

Around 1525 he moved to Soest, where a year later he painted the wings and predella of the Mary altar for the church of St. Peter. His signature and symbolic clog show that he was still using his father’s name.

His first engravings appeared in 1527. They were signed with a monogram “AG”, resembling closely that of Albrecht Dürer. In 1531, influenced by surrounding religious fervour, he became a Lutheran. Because of lack of church commissions he devoted most of his time to portrait painting and printmaking. Aldegrever’s some 290 engravings and woodcuts, chiefly from his own designs, are delicate and minute, though somewhat hard in style, and entitle him to a place in the front rank of the so-called “Little Masters”: Barthel Beham, his brother Hans Sebald Beham, and Georg Pencz, with whom he is often compared. Like them, he was also a skilled ornament designer. From the close resemblance of his style to that of Albrecht Dürer he has also sometimes been called the “Albert of Westphalia”. He made a large number of ornament prints.

Aldegrever, who actively supported the Reformation, executed portraits of Martin Luther and Philip Melanchton. Although he chose the Lutheran Church, he had friends among the Anabaptists. He was commissioned by the bishop of Münster in 1535–36 to engrave portraits of Anabaptist leaders Jan van Leyden and Berndt Knipperdolling, although they were already imprisoned, and only caricatures of them circulated. In the cycle Power of Death, done under visible influence of Hans Holbein, he criticizes the vices of the Catholic Church.

Aldegrever was interested also in folk subjects. In 1538 and 1551 two series of prints depicting marriage dances were made. An important part of his oeuvre are prints on mythological subjects, the Deeds of Hercules being one of the best examples.

There is a good collection of his prints in the British Museum. Specimens of his painting are exceedingly rare. Five pictures are in continental galleries, but the genuineness of the works in the Vienna and Munich collections attributed to him is at least doubtful, the only unchallenged example being a portrait of Engelbert Therlaen (1551) in the Berlin Museum.

Lot and his Daughters

Fifteen Children at a Round-Dance