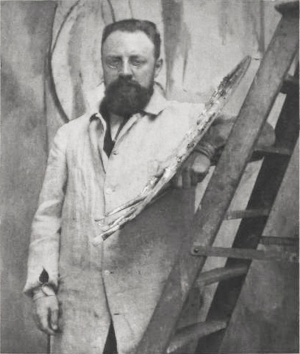 Henri-Émile-Benoît Matisse (31 December 1869 – 3 November 1954) was a French artist, known for both his use of color and his fluid and original draughtsman ship. He was a draughtsman, printmaker, and sculptor, but is known primarily as a painter.

Matisse is commonly regarded, along with Pablo Picasso and Marcel Duchamp, as one of the three artists who helped to define the revolutionary developments in the plastic arts in the opening decades of the 20th century, responsible for significant developments in painting and sculpture. Although he was initially labeled a Fauve, by the 1920s he was increasingly hailed as an upholder of the classical tradition in French painting. His mastery of the expressive language of color and drawing, displayed in a body of work spanning over a half-century, won him recognition as a leading figure in modern art.

He first started to paint in 1889, after his mother brought him art supplies during a period of convalescence following an attack of appendicitis. He discovered “a kind of paradise” as he later described it, and decided to become an artist, deeply disappointing his father. In 1891 he returned to Paris to study art at the Académie Julian and became a student of William-Adolphe Bouguereau and Gustave Moreau. Initially he painted still lifes and landscapes in a traditional style, at which he achieved reasonable proficiency. In 1898, on the advice of Camille Pissarro, he went to London to study the paintings of J. M. W. Turner. Upon his return to Paris in February 1899, he worked beside Albert Marquet and met André Derain.

Fauvism as a style began around 1900 and continued beyond 1910. The movement as such lasted only a few years, 1904–1908, and had three exhibitions. The leaders of the movement were Matisse and André Derain.

In 1917 Matisse relocated to Cimiez on the French Riviera, a suburb of the city of Nice. His work of the decade or so following this relocation shows a relaxation and a softening of his approach. This “return to order” is characteristic of much art of the post-World War I period and can be compared with the neoclassicism of Picasso and Stravinsky as well as the return to traditionalism of Derain. His orientalist odalisque paintings are characteristic of the period; while this work was popular, some contemporary critics found it shallow and decorative.  After 1930 a new vigor and bolder simplification appeared in his work.

Diagnosed with abdominal cancer in 1941, Matisse underwent surgery that left him chair and bed bound. Painting and sculpture had become physical challenges, so he turned to a new type of medium. With the help of his assistants, he began creating cut paper collages, or decoupage. He would cut sheets of paper, pre-painted with gouache by his assistants, into shapes of varying colors and sizes, and arrange them to form lively compositions. Initially, these pieces were modest in size, but eventually transformed into murals or room-sized works. The result was a distinct and dimensional complexity—an art form that was not quite painting, but not quite sculpture.