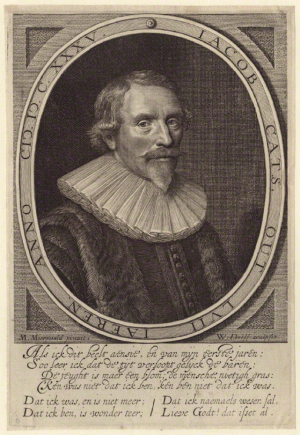 Having lost his mother at an early age, and being adopted with his three brothers by an uncle, Cats was sent to school at Breda. He then studied law at Rotterdam and at Paris, and, returning to Holland, he settled at the Hague, where he began to practise as an advocate.

In 1621, on the expiration of the twelve-year truce with Spain, the breaking of the dykes drove him from his farm. He was made pensionary (stipendiary magistrate) of Middelburg; and two years afterwards of Dordrecht.. In 1627 Cats came to England on a mission to Charles I. In 1636 he was made Grand Pensionary of Holland, and in 1648 keeper of the great seal; in 1651 he resigned his offices, but in 1657 he was sent a second time to England on what proved to be an unsuccessful mission to Oliver Cromwell.

Cats retired to the seclusion of his palatial villa “Sorghvliet” (“Fly From Care”), which was surrounded by a vast and sumptuous formal garden; the garden became internationally famous and featured in 17th-century collections of engravings of famous European gardens. Here he lived from this time till his death, occupied in the composition of his autobiography (Eighty-two Years of My Life, first printed at Leiden in 1734) and of his poems. He became famous in his own lifetime from his moralistic Emblem books, most notably Sinne en Minnebeelden, for which Adrian van der Venne cut the plates.

Cats was contemporary with Hooft and Vondel and other distinguished Dutch writers in the golden age of Dutch literature, but his Orangist and Calvinistic opinions separated him from the liberal school of Amsterdam poets. He was, however, intimate with Constantijn Huygens, whose political opinions were more nearly in agreement with his own. Although hardly known outside of Holland, among his own people for nearly two centuries he enjoyed an enormous popularity.

Cats’ moralistic poems were told and retold like nursery rhymes over several generations. Even today many of his coined phrases are still colloquialisms in everyday Dutch.