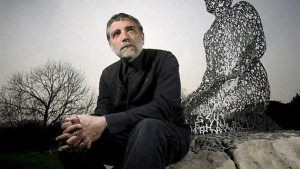 Jaume Plensa (born 1955) is a Catalan artist and sculptor.

Plensa was born in Barcelona, Catalonia, and studied art there, in the “Llotja” School and in the Escola Superior de Belles Arts de Sant Jordi.

His works include the Crown Fountain at Millenium Park in Chicago, Illinois, United States. It opened in July 2004. The fountain is composed of a black granite reflecting pool placed between a pair of glass brick towers. The towers are 50 feet (15 m) tall, and they use LEDs to display digital videos on the inward faces.

Another Plensa piece is Blake in Gateshead, in North East England, a laser beam that on special occasions shines high into the night sky over Gateshead’s Baltic Center for Contemporary Art. In the summer of 2007 he participated in the Chicago Public Art exhibit, Cool Globes: Hot Ideas for a Cooler Planet.

In 2007, working closely with a group of local ex-miners, he was also commissioned to create a new work on the landmark site of a former colliery near St Helens, Merseyside, as part of the Big Art Project, a major national public art initiative. Unveiled in spring 2009, The Dream consists of an elongated white structure 20 meters (66 ft) tall, weighing 500 tons, which has been carved to resemble the head and neck of a young woman with her eyes closed in meditation. The structure is coated in sparkling white Spanish dolomite,  as a contrast to the coal which used to be mined there.

On 16 June 2008 Plensa’s sculpture of a listening glass entitled Breathing was dedicated as a memorial to journalists killed whilst undertaking their work. The sculpture in steel and glass sits atop a new wing of Broadcasting House in London. At 22:00 GMT each evening a beam of light will be projected from the sculpture extending 1 km into the sky for 30 minutes to coincide with the BBC News at Ten.

El alma del Ebro was created for the International Exposition in Zaragoza (Spain) the theme of which was “Water and Sustainable Development”. It is eleven meters high, the sculpted letters representing cells of the human body which is over 60% water. Its white letters and hollow structure invite the viewer to look inside and reflect on the relationship between human beings and water. A similar sculpture entitled Singapore Soul (2011) was installed in front of the Ocean Financial Center in Singapore.

From May to mid-August 2011 the work Echo was displayed in Madison Square Park in Manhattan.

Plensa is also a very prolific artist in the domain of graphic art. He establish the close relationship between sculpture and engraving.