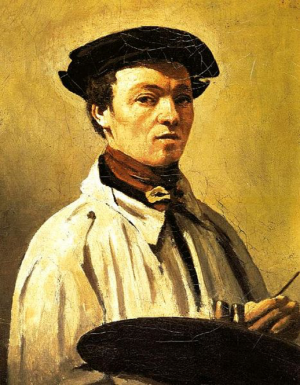 Jean-Baptiste-Camille Corot (July 16, 1796 – February 22, 1875) was a French landscape and portrait painter as well as a printmaker in etching. He is a pivotal figure in landscape painting and his vast output simultaneously references the Neo-Classical tradition and anticipates the plein-air innovations of Impressionism.

Corot is a pivotal figure in landscape painting. Of him Claude Monet exclaimed in 1897, “There is only one master here—Corot. We are nothing compared to him, nothing.” His contributions to figure painting are hardly less important but the classical figures of Picasso pay overt homage to Corot’s influence.

Historians have divided his work into periods, but the points of division are often vague, as he often completed a picture years after he began it. In his early period, he painted traditionally and “tight”—with minute exactness, clear outlines, thin brush work, and with absolute definition of objects throughout, with a monochromatic under-painting or ébauche. After he reached his 50th year, his methods changed to focus on breadth of tone and an approach to poetic power conveyed with thicker application of paint; and about 20 years later, from about 1865 onwards, his manner of painting became more lyrical, affected with a more impressionistic touch. In his final 10 years he became the “Père Corot” of Parisian artistic circles, where he was regarded with personal affection, and acknowledged as one of the five or six greatest landscape painters the world had seen, along with Hobbema, Claude Lorrain, Turner, and Constable. In his long and productive life, he painted over 3,000 paintings.

Though often credited as a precursor of Impressionist practice, Corot approached his landscapes more traditionally than is usually believed. Compared to the Impressionists who came later, Corot’s palette is restrained, dominated with browns and blacks along with dark and silvery green. Though appearing at times to be rapid and spontaneous, usually his strokes were controlled and careful, and his compositions well-thought out and generally rendered as simply and concisely as possible, heightening the poetic effect of the imagery.

Although he was a major proponent of plein-air studies, he was essentially a studio painter and few of his finished landscapes were completed before the motif. In the 1860s, Corot became interested in photography, which had the effect of suppressing his painting palette even more in sympathy with the monochromic tones of photographs.

In addition to his landscapes, Corot produced a number of prized figure pictures. While the subjects were sometimes placed in pastoral settings, these were mostly studio pieces, drawn from the live model with both specificity and subtlety. Like his landscapes, they are characterized by a contemplative lyricism.

Corot also executed many etchings and pencil sketches. Some of the sketches used a system of visual symbols—circles representing areas of light and squares representing shadow. He also experimented with the cliché verre process—a hybrid of photography and engraving.