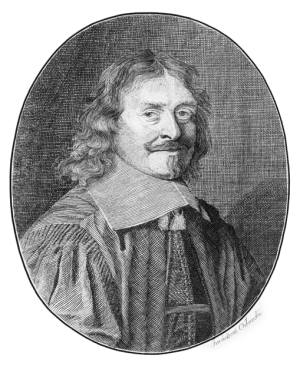 Jeremias Falck (also Jeremiah Falck in English, Jeremiasz Falck in Polish) (1610–1677) was an engraver of the 17th century Baroque, born and active in the Polish–Lithuanian Commonwealth. He signed his works as Falck Polonus (Falck the Pole) or Falck Gedanensis (Falck of Gdańsk).

Born probably around 1610 in Danzig (Gdańsk), in the province of Polish Prussia, a part of the Poland. Falck studied and worked with Wilhelm Hondius. In 1639 he moved to Paris, and in 1649 he became Royal Swedish engraver for Queen Christina in Sweden until 1654, when she became a Catholic. He then went to the Netherlands, were he engraved a portrait of Willem Blaeu, and to Germany. In 1662 in Hamburg he published 16 engravings of flowers and plants. He engraved the royals of the places he worked and he intermittently worked in Danzig.

Many of Falck’s engravings are based on portraits by Daniel Schultz and other painters. Falck’s work was admired and used by publisher Georg Forster, such as engraved illustrations for “Selenography” of Johannes Hevelius and “Orationes” of Jerzy Ossoliński, Great Crown Chancellor of the Polish–Lithuanian Commonwealth.
Falck lies buried in St. Peter and St. Paul’s Church. The 1890 book with dedication by the great-grandson Herman Eugen Falk thanks a number of Polish writers who collected works by Falck.

Of about three hundred portraits and pictures, which were personally inspected by J.C. Block for his book, nearly all works show J. Falck, sculp., but there are some that identify him as Swedish sculptor, when he was in salaried employment in Sweden. There are also listed about nine copper-etching Portrait Ovals mostly of Polish Bishops by Falck alone or with name: Dankert or Georg Förster (Georg Forster). These nine metal ovals are mounted on rectangles and the rectangles are inscribed with “Jeremias Falck Polonus”.