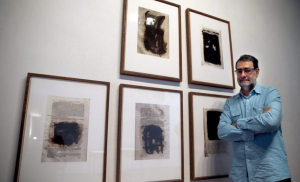 Joan Fontcuberta (born 24 February 1955 in Barcelona, Catalonia) is a conceptual artist whose best-known works, such as Fauna and Sputnik, examine the truthfulness of photography. In addition, he is a writer, engraver, editor, teacher, and curator.

In 1980 he co-founded the Spanish/English visual arts journal PhotoVision, and he is still Editor in Chief. Since 1993 Fontcuberta has been a professor of audiovisual communication at Pompeu Fabra University in Barcelona. Among other teaching appointments, he was visiting lecturer in Visual and Environmental Studies at Harvard University in 2003. Among other awards, he was named an Officer in the Order of Arts and Letters by the French Ministry of Culture in 1994. His curatorial experience includes serving as the Artistic Director of the 1996 Rencontres d’Arles, an international photography festival. He exhibited at Les Rencontres d’Arles, France, in 2005 and 2009.

One of his fingers is missing as a result, he said in a 2014 interview, to a home-made bomb blowing up in his hand. He says that the missing finger makes him a terrible photographer, although in 2013 he won the Hasselblad International Award in Photography.

Fontcuberta describes himself as “self-taught in photography” and considers himself “a conceptual artist using photography.” He states that the propaganda and dictatorship of Spain under Franco in his first 20 years led him to be skeptical about authority, which is reflected in his art. His background in communications and advertising led him to contemplate the relationship between photography and truth, and Fontcuberta believes that humor is an important component of his work. His art has been described as postmodern.