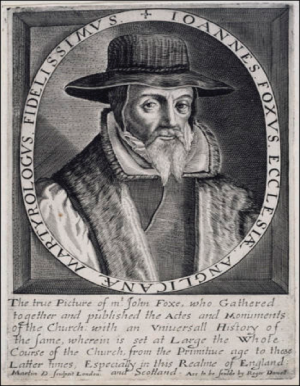 John Foxe (1516/17 – 18 April 1587) was an English historian and martyrologist, the author of Actes and Monuments (popularly known as Foxe’s Book of Martyrs), an account of Christian martyrs throughout Western history but emphasizing the sufferings of English Protestants and proto-Protestants from the fourteenth century through the reign of Mary I. Widely owned and read by English Puritans, the book helped mould British popular opinion about the Catholic Church for several centuries.

Foxe began his Book of Martyrs in 1552, during the reign of Edward VI, with the Marian Persecutions still in the future. In 1554, while still in exile, Foxe published in Latin at Strasbourg the first shadow of his great book, emphasizing the persecution of the English Lollards during the fifteenth century. But as word of the contemporary English persecution made its way to the continent, Foxe began to collect materials to continue his story to the present. He published the first true Latin edition of his famous book at Basel in August 1559, although the segment dealing with the Marian martyrs was “no more than a fragment.”

Of course, it was difficult to write contemporary English history while living (as he later said) “in the far parts of Germany, where few friends, no conference, [and] small information could be had.” Nevertheless, Foxe who had left England poor and unknown, returned only poor.

Foxe based his accounts of martyrs before the early modern period on previous writers, including Eusebius, Bede, Matthew Paris, and many others. Foxe’s own contribution was his compilation of the English martyrs from the period of the Lollards through the persecution of Mary I. Here Foxe had primary sources of all kinds to draw on: episcopal registers, reports of trials, and the testimony of eyewitnesses, a remarkable range of sources for English historical writing of the period.

Foxe’s material is more accurate when he deals with his own period, although it is selectively presented, and the book is not an impartial account. Sometimes Foxe copied documents verbatim; sometimes he adapted them to his own use.

Foxe often treated his material casually, and any reader “must be prepared to meet plenty of small errors and inconsistencies.” Furthermore, Foxe did not hold to later notions of neutrality or objectivity. He made unambiguous side glosses on his text, such as “Mark the apish pageants of these popelings” and “This answer smelleth of forging and crafty packing”, as Foxe’s age was one of strong language s well as of cruel deeds. The 1911 Encyclopedia Britannica went so far as to accuse Foxe of “willful falsification of evidence.” Nevertheless, Foxe is “factually detailed and preserves much firsthand material on the English Reformation unobtainable elsewhere.” According to J.F. Mozley, Foxe presented “lifelike and vivid pictures of the manners and feelings of the day, full of details that could never have been invented by a forger.”