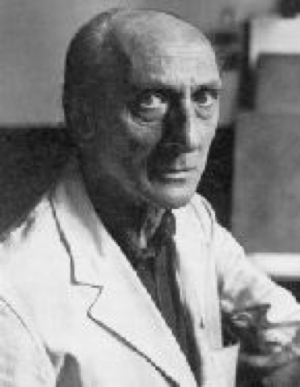 Johnny Friedlaender (26 December 1912 – Paris, 18 June 1992) was a leading 20th-century artist, whose works have been exhibited in Germany, France, Netherlands, Italy, Japan and the United States. He has been influential upon other notable artists, who were students in his Paris gallery. His preferred medium of aquatint etching is a technically difficult artistic process, of which Friedlaender has been a pioneer.

Gotthard Johnny Friedlaender was graduated from the Breslau (Wroclaw) high school in 1922 and then attended the Academy of Arts in Breslau, where he studied under Otto Mueller. He graduated from the Academy as a master student in 1928. In 1930 he moved to Dresden where he held exhibitions at the J. Sandel Gallery and at the Dresden Art Museum. He was in Berlin for part of 1933, and then journeyed to Paris.

In 1936 Friedlaender journeyed to Czechoslovakia, Switzerland, Austria, France and Belgium. At The Hague he held a successful exhibition of etchings and watercolors. He fled to Paris in 1937 as a political refugee of the Nazi regime. In that year he held an exhibition of his etchings which included the works: L ‘Equipe and Matieres et Formes. From 1939 to 1943 he was interned in a series of concentration camps, but survived against poor odds.

After freedom in 1944 Friedlaender began a series of twelve etchings entitled Images du Malheur with Sagile as his publisher. In the same year he received a commission to illustrate four books by Frères Tharaud of the French Academy. In 1945 he performed work for several newspapers including Cavalcade and Carrefour. In the year 1947 he produced the work Reves Cosmiques and in that same year he became a member of the Salon de Mai, which position he held until 1969. After living in Paris for 13 years, Friedlaender became a French citizen in 1950.

Friedlaender expanded his geographic scope in 1951 and exhibited in Tokyo in a modern art show. In the same year he was a participant in the XI Trienale in Milan, Italy.

Friedlaender accepted an international art award in 1957, becoming the recipient of the Biennial Kakamura Prize in Tokyo. In 1959 he received a teaching post awarded by UNESCO at the Museum of Modern Art in Rio de Janeiro.

From his atelier in Paris Friedlaender instructed younger artists who themselves went on to become noteworthy, among them Arthur Luis Piza, Brigitte Coudrain, René Carcan, Andreas Nottebohm, and Graciela Rodo Boulanger. Like Friedlaender, these students were expert in the lithographic and etching arts.