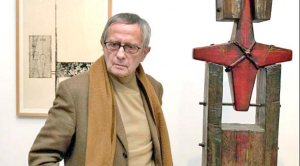 Born into a working class family in the Barcelona district of Poblenou, the precarious economic situation suffered during the post-war period forced him to renounce studying architecture. From 1942 to 1947 he worked as an apprentice under the sculptor Enric Monjo at his workshop, acquiring technical skills. But the person who taught him most profoundly was Enric Casanovas.

The expressionist aspect of Subirachs’ works is more formal than conceptual and can be found, above all, in the typically distorted angular bodies and in the treatment of textures, when he incorporates grattage, refraining from leaving surfaces smooth, making them rough, jagged, coarse, in order to accentuate the expressive capacity of the material.

In 1950 Subirachs founded, alongside the sculptors Francesc Torres Monsó and Martí Sabé and the painters Esther Boix, Ricard Creus and Joaquim Datzira, the “Postectura” group, which presented itself with an exhibition and a manifest at the Galeries Laietanes in Barcelona. The following year the Circle Maillol of the French Institute of Barcelona awarded him a scholarship to extend his studies in Paris, where he came into contact with the latest European avant-gardes.

From expressionism he moved into abstraction, in a process towards a new personal style which, towards the end of the 1950s, led him to take an interest in iron. Around this time he worked with other materials such as stone, bronze, copper, cement, fibrocement, clay or wood, striving to bring out of each material the plastic qualities of their varied structures, colors and textures.

Between 1957 and 1960 Subirachs began his significant contribution to the field of public sculpture.

Towards 1965, he sets his sights on endowing his work with more communicative elements and, in order to achieve this, he opts for a new figuration. However, this is not a representative figuration, but rather a new meaningful figuration characterized by the introduction of plastic resources such as continuous profiles, moulds and turned shapes, as well as classical elements such as niches, capitals, caryatids and balustrades. And in the early seventies, he also incorporates realistic pictorial elements. This is also the stage in which he consolidates the analysis of dualities and oppositions.

In 1986 Subirachs was commissioned to undertake a project of extraordinary proportions: the groups of sculptures on the Passion Façade of the Sagrada Família in Barcelona; the emblematic work by the brilliant architect Antoni Gaudí. Subirachs dedicated almost twenty years (1987 to 2005) to this group of works.

A multi-faceted artist, Subirachs has not only expressed himself through tridimensional creation, but also by means of other techniques such as painting, drawing, graphic art (etching, dry point, serigraphy and lithography), tapestry, book illustration, medal minting and designing jewellery and other utilities.