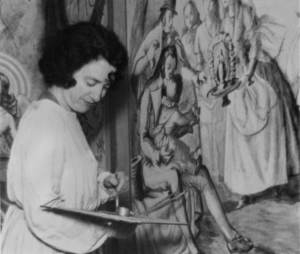 Lola Anglada i Sarriera (1893 Barcelona – 1984 Tiana, Province of Barcelona) was a Spanish writer and illustrator.

Born to a Barcelona family with strong roots in Tiana, she studied at La Llotja de Barcelona with Joan Llaverias and Antoni Utrillo who helped Anglada get her first exposure in the Sala Parés and in the weekly magazine ¡Cu-Cut!, which published her drawings. Later, and for a short period, would enter the academy Francesc d’ A. Galí, where he met Joan Miró and Cristōfol Ricard, with the latter establishing close friendships both personally and artistically

At the end of World War I Anglada traveled to Paris thanks to a French Government scholarship, collaborating with several publishing companies there, where she corresponded with Francesc Macià or Josep Clarà. Infused with democratic values and the Catalanist cause, she organized a request of amnesty for the accused participants in the Garraf Plot against the King Alfonso XIII of Spain.

During the Spanish Civil War, she joined the UGT and collaborated in the Commissariat of propaganda, with the latter published in the Spanish Civil War (1937) that perhaps its most iconic and recognized Tale: The month of petit tots. Once the war ended, she settled permanently in Tiana, a town in the Maresme region near Barcelona, in the farm family resort where she died on 12 September 1984.

Versatile, with excellent drawing technique, great sensitivity and a strong Catalanist, Lola Anglada is considered the last of the classical Catalan illustrators of the 20th century and one of the most important writers of the pre-war era.

She collaborated with several children’s magazines, including En Jordi, En Patufet, La Nuri (set up by Anglada herself) and La Mainada. The character that she made most well-known, “El més petit de tots” (“the smallest of all of them”), is a symbol of Catalan national identity of that period.

Between 1984 and 2003, she granted herself the Prize Lola Anglada of brief stories for boys and girls, summoned by the Caixa de Terrassa and the Town Council of Terrassa.
Her personal collection is preserved in the Photographic Archive of Barcelona.