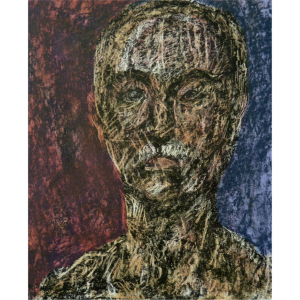 Mark George Tobey (December 11, 1890 – Basel, April 24, 1976) was an American painter. His densely structured compositions, inspired by Asian calligraphy, resemble Abstract expressionism, although the motives for his compositions differ philosophically from most Abstract Expressionist painters. His work was widely recognized throughout the United States and Europe. Along with Guy Anderson, Kenneth Callahan, Morris Graves, and William Cumming, Tobey was a founder of the Northwest School. Senior in age and experience, he had a strong influence on the others; friend and mentor, Tobey shared their interest in philosophy and Eastern religions. Similar to others of the Northwest School, Tobey was mostly self-taught after early studies at the Art Institute of Chicago. In 1921, Tobey founded the art department at The Cornish School in Seattle, Washington.

Tobey was an incessant traveler, visiting Mexico, Europe, Palestine, Israel, Turkey, Lebanon, China and Japan. After converting to the Bahai’ Faith, it became an important part of his life. Whether Tobey’s all-over paintings, marked by oriental brushwork and calligraphic strokes, were an influencer on Jackson Pollock’s drip paintings has been left unanswered.

Tobey is most notable for his creation of so-called “white writing” – an overlay of white or light-colored calligraphic symbols on an abstract field which is often itself composed of thousands of small and interwoven brush strokes. This method, in turn, gave rise to the type of “all-over” painting style made most famous by Jackson Pollock, another American painter to whom Tobey is often compared. Tobey’s work is also defined as creating a vibratory space with the multiple degrees of mobility obtained by the Brownian movement of a light brush on a bottom with the dense tonalities. The series of “Broadway” realized at that time has a historical value of reference today. It precedes a new dimension of the pictorial vision, that of contemplation in the action. His work is inspired by a personal belief system that suggests Oriental influences and reference to Tobey’s involvement in the Bahá’í Faith. Four of Tobey’s signed lithographs hang in the reception hall in the Seat of the Universal House of Justice, the supreme governing institution of the Bahá’í Faith.

Tobey’s work can also be found in most major museums in the U.S. and internationally, including the Smithsonian American Art Museum, the Tate Gallery in London, the MoMA, the Whitney Museum of American Art  and the MET in New York City.