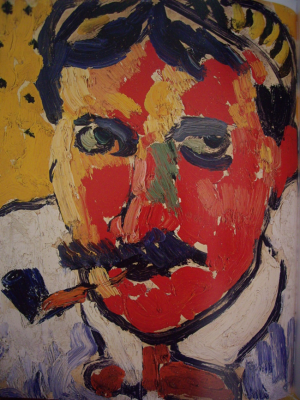 Maurice de Vlaminck (4 April 1876 – Rueil-la-Gadelière, 11 October 1958) was a French painter. Along with André Derain and Henri Matisse he is considered one of the principal figures in the Fauve movement, a group of modern artists  who from 1904 to 1908 were united in their use of intense colour. Vlaminck one of the Fauves at the controversial Salon d’Automne exhibition of 1905.

He began painting in his late teens. In 1893, he studied with a painter named Henri Rigalon on the Île de Chatou.  The turning point in his life was a chance meeting on the train to Paris towards the end of his stint in the army. De Vlaminck, then 23, met an aspiring artist, André Derain, with whom he struck up a lifelong friendship. When de Vlaminck completed his army service in 1900, the two rented a studio together, the Maison Levanneur which now houses the Cneai, for a year before Derain left to do his own military service. In 1902 and 1903 he wrote several mildly pornographic novels illustrated by Derain. He painted during the day and earned his livelihood by giving violin lessons and performing with musical bands at night.

In 1911, de Vlaminck traveled to London and painted by the Thames. In 1913, he painted again with Derain in Marseille and Martigues. In World War I he was stationed in Paris, and began writing poetry. Eventually he settled in Rueil-la-Gadelière, a small village south-west of Paris. From 1925 he traveled throughout France, but continued to paint primarily along the Seine, near Paris. Resentful that Fauvism had been overtaken by Cubism as an art movement de Vlaminck blamed Picasso. During the Second World War de Vlaminck visited Germany and on his return published a tirade against Picasso and Cubism in the periodical Comoedia in June 1942. A practiced story teller, de Vlaminck wrote many autobiographies, marred little either by lack of confidence or adherence to the truth.

De Vlaminck’s compositions show familiarity with the Impressionists,  several of whom had painted in the same area in the 1870s and 1880s. After visiting a van Gogh exhibit, he declared that he “loved van Gogh that day more than my own father“. From 1908 his palette grew more monochromatic, and the predominant influence was that of Cézanne. His later work displayed a dark palette, punctuated by heavy strokes of contrasting white paint.