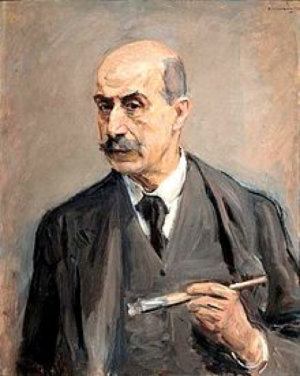 Max Liebermann (July 20, 1847 – February 8, 1935) was a German-Jewish painter and printmaker best known for his etching and lithography.

The son of a Jewish businessman from Berlin, Liebermann first studied law and philosophy at the University of Berlin, but later studied painting and drawing in Weimar in 1869, in Paris in 1872, and in the Netherlands in 1876–77. During the Franco-Prussian War (1870–71), Liebermann served as a medic with the Order of St. John near Metz. After living and working for some time in Munich, he finally returned to Berlin in 1884, where he remained for the rest of his life.

He used his own inherited wealth to assemble an impressive collection of French Impressionist works. He later chose scenes of the bourgeoisie, as well as aspects of his garden near Lake Wannsee, as motifs for his paintings. In Berlin, he became a famous painter of portraits; his work is especially close in spirit to Édouard Manet. From 1899 to 1911 he led the premier avant-garde formation in Germany, the Berlin Secession. Beginning in 1920 he was president of the Prussian Academy of Arts. In 1933 he resigned when the academy decided to no longer exhibit works by Jewish artists. While watching the Nazis celebrate their victory by marching through the Brandenburg Gate, Liebermann was reported to have commented: “Ich kann gar nicht so viel fressen, wie ich kotzen möchte” (“I cannot eat as much as I would like to vomit”).

Together with Lovis Corinth and Max Slevogt, Liebermann became an exponent of German Impressionism.

On April 30, 2006, the Max Liebermann Society opened a permanent museum in the Liebermann family’s villa in the Wannsee district of Berlin. The artist’s wife, Martha Liebermann, was forced to sell the villa in 1940. On March 5, 1943, at the age of 85 and bedridden from a stroke, she was notified to get ready for deportation to Theresienstadt concentration camp. Instead, she committed suicide in the family home, Haus Liebermann, hours before police arrived to take her away. There is a stolperstein for her in front of their former home by the Brandenburg Gate in Berlin.