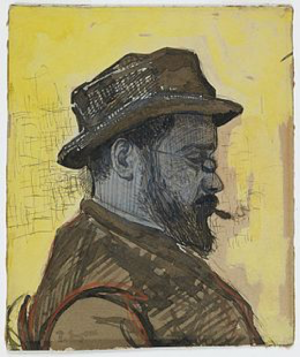 Maximilien Luce (13 March 1858 – 6 February 1941) was a prolific French Neo-impressionist artist, known for his paintings, illustrations, engravings, and graphic art, and also for his anarchist activism. Starting as an engraver, he then concentrated on painting, first as an Impressionist, then as a Pointillist, and finally returning to Impressionism.

In 1872, Luce became an apprentice with wood-engraver Henri-Théophile Hildebrand (1824–1897). During his three-year xylography apprenticeship, he also took night classes in drawing from instructors Truffet and Jules-Ernest Paris (1827–1895). During this period, Luce started painting in oils. His art education continued as he attended drawing classes taught by Diogène Maillard (1840–1926) at the Gobelins factory.

Luce began working in the studio of Eugène Froment (1844–1900) in 1876, producing woodcut prints for various publications. He took additional art courses, at l’Académie Suisse, and also in the studio of portrait painter Carolus-Duran (1837–1917).

The prevalence of the new zincography printing process rendered xylography nearly obsolete as a profession. When the opportunities for employment as an engraver became scarce, Luce shifted his focus to painting full-time in about 1883. Gausson and Cavallo-Péduzzi introduced Luce in about 1884 to the Divisionist technique developed by Georges Seurat. This influenced Luce to begin painting in the Pointillist style. In contrast to Seurat’s detached manner, Luce’s paintings were passionate portrayals of contemporary subjects, depicting the “violent effects of light”. Luce joined the Société des Artistes Indépendants and participated in their third spring exhibition. Camille Pissarro was also impressed by the Luce works displayed in the show.

In addition to Pissarro and Signac, he met many of the other Neo-impressionists. including Seurat, Henri-Edmond Cross and Pissarro’s son Lucien.

With the exception of the years 1915 to 1919, Luce exhibited in every show at Les Indépendants from 1887 until he died in 1941. In 1909, he was elected Vice President of the Société des Artistes Indépendants, and was elected President in 1935, following the death of Signac. However, in 1940 he resigned from the position as a protest against the Vichy regime’s laws which would have prohibited Jewish artists from participating in the group.

Starting near the early part of the 20th century, his identification with the Neo-impressionists began to disappear, as he became less active politically (he was an anarchist all his life), and his artistic style shifted from Neo-impressionism, and he resumed painting in an Impressionist manner.

Luce depicted a diverse range of subjects in his works over a long career. He most frequently created landscapes, but his other works include portraits, still lifes (especially floral), domestic scenes, such as bathers, and images of welders, rolling mill operators, and other laborers.