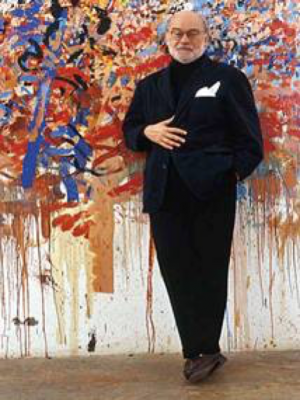 Miguel Condé (born 1939) is a Mexican figurative painter, draughtsman and printmaker. He is one of the most important contemporary masters in the field of engraving. Condé’s works are in important museum collections all over the world; he is exhibiting regularly at both public and private venues, and he has received numerous international honors and awards.

In 1956, at age 17, Condé began to study anatomy  with renowned American artist and anatomist Stephen Rogers Peck, author of the classic manual Atlas for Human Anatomy for the Artist. He also attended courses taught by the Harvard Art History professor and curator Millard Meiss, at the Fogg Art Museum. Condé returned to Mexico in 1959 and settled near Mexico City. In 1963 he was awarded a scholarship by the French government, so he moved to Paris where he studied with Stanley William Stanley in his Atelier 17.

In 1966, Condé returned to the United States and soon afterwards accepted a teaching position in drawing and mixed media in the graduate program at the University of Iowa School of Art. Condé became a McDowell Fellow in 1966 and concentrated full-time on his work in visual arts. In 1969, he traveled to France and then moved with his family to Sitges, Catalonia.

In 1971, Condé worked at the Smithsonian Institution Print Workshop in Barcelona, which reignited his interest in graphic art. He became a foreign Artist-in-residence at the Cleveland Institute of Art in Cleveland, Ohio, in 1972. In 1974, Condé was awarded the Guggenheim Fellowship. In 1977, Condé participated in Documenta 6 in Kassel, Germany. In 1978, an exhibition Miguel Condé: Guggenheim Suite took place at the Biblioteca Nacional de España in Madrid. In 1980, he was invited and took part in Peintres-Graveurs Français exhibition at the Bibliothèque Nationale de France in Paris.

In 1983, the Ministry of Culture of Spain organized an extensive retrospective exhibition Miguel Condé: 20 años de obra grabada. In a review of Condé’s graphic work on display there, art critic and prolific author Fernando Huici opined that it was “paper—already forgotten in the absurd hierarchy of genres—in both drawing and engraving, where Condé finds most freedom, where he expresses with greater ease his particular vocabulary of images… ”

In his compositions, increasingly more complex and meticulous, the absurd and the enigmatic gradually come together, Goya’s black irony, Bosch’s phantasmagorias, Brueghel’s repulsion and fluidity, and Dürer’s  virtuoso drawing. A similar sentiment was expressed by art critic Fernando Huici who remarked in 1983 that “the world that inhabits Condé’s creations, the world of his intimate fascinations, always maintains a Brueghelian flavor.”

In 2012, Miguel Condé was featured in Michael Peppiatt’s book Interviews with artists 1966 – 2012, published by the Yale University Press, along such post-war and contemporary masters as Francis Bacon, Balthus, Henry Moore, Diego Giacometti, Jean Dubuffet, Sean Scully and Antoni Tàpies, to name a few.