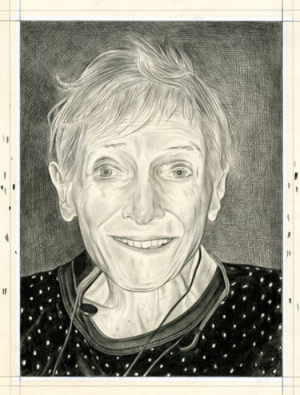 Nancy Spero (August 24, 1926 – October 18, 2009) was an American visual artist. Spero lived for much of her life in New York City. As both artist and activist, Nancy Spero had a career that spanned fifty years. She is known for her continuous engagement with contemporary political, social, and cultural concerns. Spero chronicled wars and apocalyptic violence as well as articulating visions of ecstatic rebirth and the celebratory cycles of life. Her complex network of collective and individual voices was a catalyst for the creation of her figurative lexicon representing women from prehistory to the present in such epic-scale paintings and collage on paper as Torture of Women (1976), Notes in Time on Women (1979) and The First Language (1981). In 2010, Notes in Time was posthumously reanimated as a digital scroll in the online magazine Triple Canopy.

She studied at the School of the Art Institute of Chicago, graduating in 1949. After her graduation Spero continued to study painting in Paris at the École nationale des Beaux-Arts and at the Atelier of André Lhote, an early Cubist painter, teacher and critic.

From 1956 to 1957, Spero lived and painted in Italy. Finding a more varied, inclusive and international atmosphere in Europe than in the New York art world of the time, Spero and her family moved to Paris, living there from 1959 to 1964. During this period, Spero painted a series titled Black Paintings depicting themes including mothers and children, lovers, prostitutes, and hybrid, human-animal forms.

An activist and early feminist, Spero was a member of the Art Workers Coalition (1968–69), Women Artists in Revolution (1969), and in 1972 she was a founding member of the first women’s cooperative gallery, A.I.R. (Artists in Residence) . It was during this period that Spero completed her “Artaud Paintings” (1969–70), finding her artistic “voice” and developing her signature scroll paintings, the Codex Artaud (1971–1972). In 1974, Spero chose to focus on themes involving women and their representation in various cultures; her Torture in Chile (1974) and the long scroll, Torture of Women (1976, 20 inches x 125 feet), interweave oral testimonies with images of women throughout history, linking the contemporary governmental brutality of Latin American dictatorships with the historical repression of women.

Spero manifested a desire for women to be a part of the art conversation. Spero’s most mature work lives along the lines of a peinture feminine. This is when a women is the subject as well as the “artistic consciousness”. Spero’s open-ended, thought provoking compositions of ruthless uncomfortable subject matter was depicted in hangings and friezes. Spero uses the crimes and assaults on women from all eras and cultures to provide intense and emotional imagery for her art and text. Political violence, sexism, and life-threatening situations that women endure are subjects she explored throughout her career, but especially in the 1960s and 1970s. Spero was influenced by Jean Dubuffet, Antonin Artaud, Simone de Beauvoir and Helene Cixous.