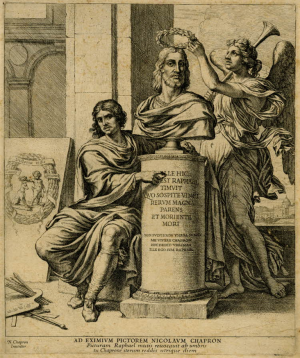 Nicolas Chaperon (Châteaudun, bapt. 19 October 1612 — Lyon, 1656) was a French painter, draughtsman and engraver, a student in Paris of Simon Vouet whose style he adopted before he was further matured by his stay in Rome (1642–51) in the studio of Nicolas Poussin.

In 1653-55 the consuls de Lyon called him to decorate the Hôtel de ville but Chaperon dying almost as soon as he arrived, the commission passed to Thomas Blanchet.

Chaperon made a name for himself with his suite of engravings after the Raphael Loggie of the Vatican, Rome, 1649, but art historians remember him for the stream of fulminating invective with which Poussin in his correspondence with Paul Fréart de Chantelou described this unruly and vindictive practician who refused to carry through his copy of a Transfiguration. So little is known of Chaperon that this episode stands out.

Most of his paintings have been optimistically attributed to Poussin, and disguised under that sellable name have entered collections in the US; thus, when the Musée du Louvre purchased its first painting by Chaperon in 2005, it was at a New York auction. Jacques Thuillier’s publication of Chaperon’s signed and dated Compiègne altarpiece, a Presentation of the Virgin, began the reassessment of this Poussiniste.