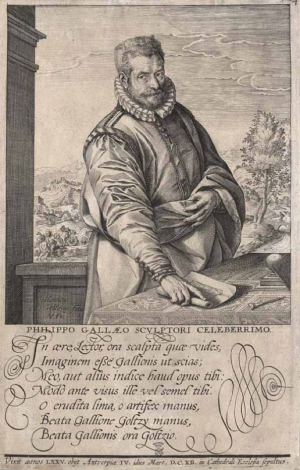 Philip (or Philips) Galle (1537 – March 1612) was a Dutch publisher, best known for publishing the old master prints, which he also produced as designer and engraver. He is especially known for his reproductive engravings of paintings.

In Haarlem he engraved several works of the Haarlem painter Maarten van Heemskerck. Even while he worked from 1557 for the Antwerp publisher Hieronymus Cock, he established himself as an independent printer in Haarlem in 1563, where he made prints after Johannes Stradanus, and Maarten de Vos. In 1569 the series of Counts of Holland and Zeeland was published, a series of 6 engravings which he made in Haarlem with Willem Thibaut, just before moving to Antwerp somewhere near the end of 1569 or the start of 1570, probably to avoid the Siege of Haarlem.

His first house in Antwerp was most probably a house called Het Gulden Hert (The Golden Deer) opposite the house of the Mapmaker Ortels (also known as Ortelius). He managed Cock’s press and succeeded Cock in 1570 and was received as a citizen of Antwerp the following year. Galle had a difficult relationship with religion and political power during his entire life. He was a friend of the Antwerp printer Christopher Plantin and perhaps part of the secretive humanist circle of the Family of Love, which makes it difficult to place him as Catholic or Protestant during the Dutch Revolt.

Some of his numerous prints made in Antwerp were after: Athonie van Blocklandt, Hans Bol, Marcus Gheeraerts, Gerard Groening, and Hans Vredeman de Vries. Philip Galle had many pupils who became popular engravers. The map engraver Cornelis de Hooghe, who later died a gruesome death when he was beheaded and quartered in the Hague because of a conspiracy against the State, received his education when Galle still lived in Haarlem, while De Hooghe already worked for himself at the moment Galle moved to Antwerp. Galle’s son Cornelis followed him as an engraver. Philip Galle’s press and publishing house was a success. His pupils included his children, de Hooghe, Hendrick Goltzius, Jan-Baptist Barbé, Pieter Nagel, the sons of his colleague Hans Collaert, Adriaen and Jan, and Karel van Mallery. His sons and sons-in-law carried on the business at Antwerp through the seventeenth century.

As a resident of Antwerp, Galle witnessed numerous events of the Eight Years War, notably the siege and looting of the town in 1576 by the Spaniards, called “The Spanish Fury”. Galle wrote a Cort Verhael, a short chronicle of these events, which was published around the end of 1578. This booklet, which included several maps, was dedicated to archduke Matthias of Austria, a relative of the legal king Philip II of Spain. A later print was dedicated to Jean de Bourgogne, lord of Froidmont or Fromont. This rather personal book, which was translated in several languages soon after its first publication, shows Galle as a peace-loving person who intended to stay far away from the political and military turmoil of his era.