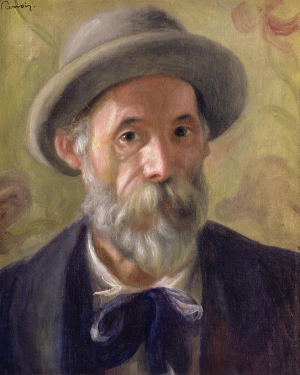 Pierre-Auguste Renoir, commonly known as Auguste Renoir (25 February 1841 – 3 December 1919), was a French artist who was a leading painter in the development of the Impressionist style.

Renoir’s paintings are notable for their vibrant light and saturated color, most often focusing on people in intimate and candid compositions. The female nude was one of his primary subjects. In characteristic Impressionist style, Renoir suggested the details of a scene through freely brushed touches of color, so that his figures softly fuse with one another and their surroundings.

His initial paintings show the influence of the colors of Eugène Delacroix and the luminosity of Camille Corot. He also admired the realism of Gustave Courbet and Édouard Manet, and his early work resembles theirs in his use of black as a color. Renoir admired Edgar Degas’ sense of movement. Another painter Renoir greatly admired was the 18th-century master François Boucher.

A fine example of Renoir’s early work and evidence of the influence of Courbet’s realism, is Diana, 1867. Ostensibly a mythological subject, the painting is a naturalistic studio work; the figure carefully observed, solidly modeled and superimposed upon a contrived landscape. If the work is a “student” piece, Renoir’s heightened personal response to female sensuality is present.

In the late 1860s, through the practice of painting light and water en plein air (outdoors), he and his friend Claude Monet discovered that the color of shadows is not brown or black, but the reflected color of the objects surrounding them, an effect known today as diffuse reflection. Several pairs of paintings exist in which Renoir and Monet worked side-by-side, depicting the same scenes (La Grenouillère, 1869).

One of the best known Impressionist works is Renoir’s 1876 Dance at Le Moulin de la Galette. The painting depicts an open-air scene, crowded with people at a popular dance garden on the Butte Montmartre close to where he lived. The works of his early maturity were typically Impressionist snapshots of real life, full of sparkling color and light. By the mid-1880s, however, he had broken with the movement to apply a more disciplined formal technique to portraits and figure paintings, particularly of women. It was a trip to Italy in 1881, when he saw works by Raphael and other Renaissance masters, that convinced him that he was on the wrong path, and for the next several years he painted in a more severe style in an attempt to return to classicism. Concentrating on his drawing and emphasizing the outlines of figures, he painted works such as The Large Bathers (1884–87).

After 1890 he changed direction again. To dissolve outlines, as in his earlier work, he returned to thinly brushed color. From this period onward he concentrated on monumental nudes and domestic scenes, fine examples of which are Girls at the Piano, 1892, and Grandes Baigneuses, 1887. The latter painting is the most typical and successful of Renoir’s late, abundantly fleshed nudes.