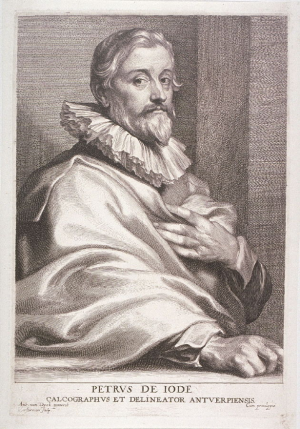 He learned drawing and engraving first from his father, the map maker Gerard de Jode, and later from Hendrik Goltzius. His engravings of Italian master paintings became a source for Karel van Mander. He travelled to Rome in 1590 where he made his engravings of Titian, Giulio Romano and Jacopo Bassano. He travelled back home and in 1599 he joined the Guild of Saint Luke in Antwerp. He made engravings after Bartholomäus Spranger, Sebastiaen Vrancx, Otto van Veen, Anthony van Dyck and Peter Paul Rubens.

He is registered as the teacher of his son Pieter de Jode II, Pieter de Bailliu, Johann Caspar Dooms and Nicolaes Rijckmans.