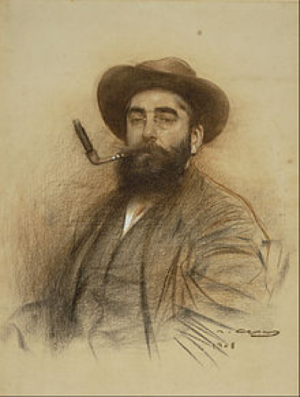 Ramon Casas i Carbó (Barcelona, 4 January 1866 – Barcelona, 29 February 1932) was a Catalan  artist. He was known as a portraitist, sketching and painting the intellectual, economic, and political elite of Barcelona, Paris, Madrid, and beyond. He was also a graphic designer, his posters and postcards helped to define the Catalan art movement known as modernisme.

In 1877 he abandoned the regular course of schooling to study art. In 1881, still in his teens, he was a co-founder of the magazine L’Avenç. That same month, he began his first stay in Paris, where he studied that winter at the Carolus Duran Academy and later at the Gervex Academy, and functioned as a Paris correspondent for L’Avenç. The next year he had a piece exhibited in Barcelona and in 1883 in Paris the Salon des Champs Elysées exhibited his portrait of himself dressed as a flamenco dancer; the piece won him an invitation as a member of the salon of the Société d’artistes français.

The next few years he continued to paint and travel, spending most autumns and winters in Paris and the rest of the year in Spain, mostly in Barcelona but also in Madrid and Granada. Among the artists he met in this period of his life, and who influenced him, were Santiago Rusiñol, Eugène Carrière and Ignacio Zuloaga.

Casas and Rusiñol traveled through Catalonia in 1889, and collaborated on a short book Por Cataluña (desde mi carro), with text by Rusiñol and illustrations by Casas. Returning together to Paris, they lived together at the Moulin de la Galette in Montmartre, along with painter and art critic Miquel Utrillo. Rusiñol chronicled these times in as series of articles “Desde el Molino” (“From the Mill”) for La Vanguardia; again Casas illustrated.

The emerging modernist art world gained a center with the opening of Els Quatre Gats, a bar modeled on Le Chat Noir in Paris. Casas largely financed this bar in Montsió Street near the center of Barcelona; it opened in June 1897 and lasted for six years. His partners in the enterprise were Pere Romeu, Rusiñol and Miquel Utrillo. The bar hosted tertulias and revolving art exhibits, including one of the first one-man shows by Pablo Picasso; the most prominent piece in its permanent collection was a Casas self-portrait, depicting him while pedaling a tandem bicycle with Romeu.

While his painting career continued successfully through this period, as part owner of a bar Casas engaged heavily in graphic design, adopting the art nouveau style that would come to define modernisme. He designed posters for the café and he also executed a series of advertisements for Codorniu, a brand of cava, and for anisette brand.

For the 1900 Exposition Universelle (1900) in Paris, the Spanish committee chose two of Casas’ full-length oil portraits: an 1891 portrait of Erik Satie and an 1895 portrait of Casas’ sister Elisa. His 1894 Garrote Vil —a portrayal of an execution— won a major prize in Munich in 1901; his work was shown not only in the major capitals of Europe, but as far away. In 1902, twelve of his canvasses were installed permanently in the rotunda of the Cercle del Liceu, the exclusive private club associated with Barcelona’s famous opera house.