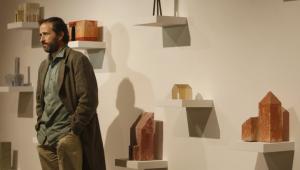 Ramon Enrich (Igualada, 1968) is a Catalan painter, engraver and sculptor. His artistic vocation was influenced by his father, Ramon Enrich, a knitwear manufacturer who taught himself drawing, music and architecture.

He studied Fine Arts in Barcelona, and also History (unfinished) and Graphic Arts. Late 80s, he obtained some scholarships to paint and exhibit abroad. He spent long periods in Mousonturn cultural center in Frankfurt, and in Berlin. Great admirer of Donald Judd, he moved to the United States in 1988 and he settled down in Marfa, where Judd lived. In the Chinati Foundation and in the Judd Foundation, he exposed works he developed there. Later, he travelled to Los Angeles, where he met Ed Ruscha and worked with David Hockney. Then he settled down in New York, where he worked as an assistant in Julian Schnabel’s studio.

He has exhibited many times in Barcelona, Amsterdam, Hong Kong, New York, Brussels and Paris. Nowadays, he lives and works in Igualada.

There are some recurrent issues in his paintings concerning the relationship between architecture and landscape. He paints large empty scenarios formed by architectural and vegetal elements, being specially interested in the simplification and essential representation of things.

They are big canvas with unanimated and mysterious choreographies coming from a reality sieved by geometrics and metaphysics. He plays with a symbolical alphabet of elements: great typographies, the cypress, manufacturing warehouses, deposits, ponds, ramps, baroque gardens. They are timeless, close to surrealism and, with an ironic treatment of landscape coming from romantic tradition.