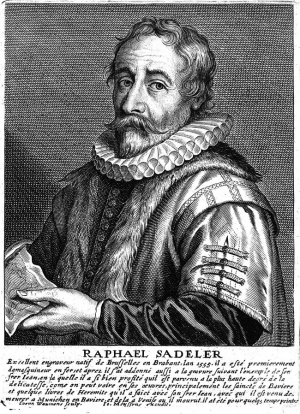 The Sadeler family were the largest, and probably the most successful of the dynasties of Flemish engravers that were dominant in Northern European printmaking in the later 16th and 17th centuries, as both artists and publishers. As with other dynasties such as the Wierixes and Van de Passe family, the style of family members is very similar, and their work often hard to tell apart in the absence of a signature or date, or evidence of location. Altogether at least ten Sadelers worked as engravers, in the Spanish Netherlands, Germany, Italy, Bohemia and Austria.

Much of their best work was high quality reproductive prints of contemporary artists such as Bartholomeus Spranger (Aegidius II) or the Venetian Bassano family (Jan I and Rafael I), that were important in spreading the reputation and style of these artists.

Jan was in Antwerp by 1572; it was then the centre of the printmaking world, with hugely productive workshops producing work for publishers with excellent distribution arrangements throughout Europe. In that year he became a master of the artists’ Guild of Saint Luke, and married in Antwerp Cathedral. By 1569 or 1570 he was doing work for the publisher Christopher Plantin. His younger brother Rafael I joined him there, and they continued to work closely together, moving to Cologne in about 1579, but continuing to visit Antwerp. The disruptions of the Dutch Revolt scattered all the Antwerp artists across Northern Europe, and after the siege of Antwerp in 1585 Jan and Rafael worked in several German cities: Mainz, Frankfurt, Munich without settling for long, before they went to Italy in 1593, where Jan may have died. They first went, accompanied by their nephew Aegidius II, to Verona, then Venice from 1597, where they had a shop. In 1604 Rafael returned to Munich, where he remained for most of the rest of his life, of which the last record comes in 1622. Jan’s son Marcus, or Marco, remained in Italy as a publisher and artist, though there may be confusion between his work and that of his presumed relation the older Marcus.