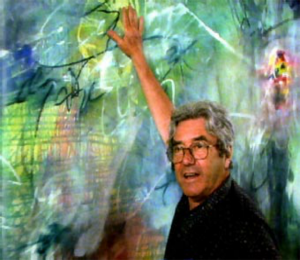 Born in Santiago, he studied architecture and interior design at the Pontificia Universidad Católica de Chile, and graduated in 1935. That spring, he journeyed from Peru to Panama and completed surreal drawings of many of the geographical features he witnessed. He first encountered Europe while serving in the Merchant Marine after graduating. His travels in Europe and the USA led him to meet artists such as Arshile Gorky, René Magritte, Salvador Dalí, André Breton and Le Corbusier.

It was Breton who provided the major spur to the Chilean’s direction in art, encouraging his work and introducing him to the leading members of the Paris Surrealist movement. Matta produced illustrations and articles for Surrealist journals such as Minotaure. During this period he was introduced to the work of many prominent contemporary European artists, such as Pablo Picasso and Marcel Duchamp.

The first true flowering of Matta’s own art came in 1938, when he moved from drawing to the oil painting for which he is best known. This period coincided with his emigration to the United States, where he lived until 1948. His early paintings give an indication of the work he would continue, with diffuse light patterns and bold lines on a featureless background. This is also the period of the “inscape” series, and the closely related “psychological morphologies”. According to the essay on Matta in Crosscurrents of Modernism, the inscapes’ evocative forms “are visual analogies for the artist’s psyche”. During the 1940s and 1950s, the disturbing state of world politics found reflection in Matta’s work, with the canvases becoming busy with images of electrical machinery and distressed figures. The addition of clay to Matta’s paintings in the early 1960s lent an added dimension to the distortions.

He divided his life between Europe and South America during the 1950s and 1960s, successfully combining the political and the semi-abstract in epic surreal canvases. Matta believed that art and poetry can change lives, and was very involved in the social movements of the 1960s and 1970s. He was a strong supporter of the government of president Salvador Allende in Chile.

Throughout his life, Matta worked with many different types of media, including ceramic, photography, prints, and video production.