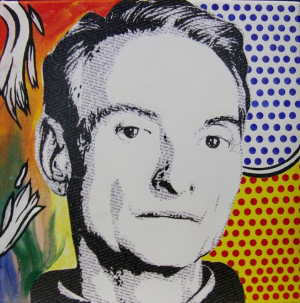 Roy Fox Lichtenstein (October 27, 1923 – September 29, 1997) was an American pop artist. During the 1960s, along with Andy Warhol, Jasper Johns, and James Rosenquist among others, he became a leading figure in the new art movement. His work defined the basic premise of pop art through parody. Favoring the comic strip as his main inspiration, Lichtenstein produced hard-edged, precise compositions that documented while it parodied often in a tongue-in-cheek manner. His work was heavily influenced by both popular advertising and the comic book style.

In his last year of high school, 1939, Lichtenstein enrolled in summer classes at the Art Students League of New York, where he worked under the tutelage of Reginald Marsh.

Lichtenstein then left New York to study at the Ohio State University, which offered studio courses and a degree in fine arts. His studies were interrupted by a three-year stint in the army during and after World War II between 1943 and 1946. After being in training programs for languages, engineering, and pilot training, all of which were cancelled, he served as an orderly, draftsman, and artist.

Lichtenstein returned to studies in Ohio under the supervision of one of his teachers, Hoyt L. Sherman, who is widely regarded to have had a significant impact on his future work. In 1949 Lichtenstein received a Master of Fine Arts degree from the Ohio State University

In 1957, he moved back to upstate New York and began teaching again. It was at this time that he adopted the Abstract Expressionism style, being a late convert to this style of painting. Lichtenstein began teaching in upstate New York at the State University of New York in 1958. About this time, he began to incorporate hidden images of cartoon characters such as Mickey Mouse and Bugs Bunny into his abstract works.

He moved back to New York to be at the center of the art scene and resigned from Rutgers University in 1964 to concentrate on his painting. Of his own work Lichtenstein would say that the Abstract Expressionists “put things down on the canvas and responded to what they had done, to the color positions and sizes. My style looks completely different, but the nature of putting down lines pretty much is the same; mine just don’t come out looking calligraphic, like Pollock’s or Kline’s.”

Lichtenstein began experimenting with sculpture around 1964, demonstrating a knack for the form that was at odds with the insistent flatness of his paintings. Lichtenstein then applied a glaze to create the same sort of graphic motifs that he used in his paintings; the application of black lines and Ben-Day dots to three-dimensional objects resulted in a flattening of the form.

Most of Lichtenstein’s best-known works are relatively close, but not exact, copies of comic book panels, a subject he largely abandoned in 1965, though he would occasionally incorporate comics into his work in different ways in later decades. These panels were originally drawn by such comics artists.

The enemy would have been warned

As I opened Fire P…

That my ship was below them…