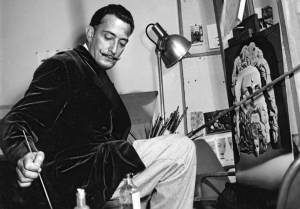 Dalí was a skilled draftsman, best known for the striking and bizarre images in his surrealist work. His painterly skills are often attributed to the influence of Renaissance masters. Dalí’s expansive artistic repertoire included film, sculpture, and photography, in collaboration with a range of artists in a variety of media.

Dalí was highly imaginative, and also enjoyed indulging in unusual and grandiose behavior. His eccentric manner and attention-grabbing public actions sometimes drew more attention than his artwork, to the dismay of those who held his work in high esteem, and to the irritation of his critics.

Dalí employed extensive symbolism in his work. For instance, the hallmark “melting watches” that first appear in The Persistence of Memory suggest Einstein’s theory that time is relative and not fixed. The idea for clocks functioning symbolically in this way came to Dalí when he was staring at a runny piece of Camembert cheese on a hot day.

The elephant is also a recurring image in Dalí’s works. It appeared in his 1944 work Dream Caused by the Flight of a Bee Around a Pomegranate a Second Before Awakening. The elephants, inspired by Gian Lorenzo Bernini’s sculpture base in Rome of an elephant carrying an ancient obelisk.  Coupled with the image of their brittle legs, these encumbrances, noted for their phallic overtones, create a sense of phantom reality. “The elephant is a distortion in space”, one analysis explains, “its spindly legs contrasting the idea of weightlessness with structure.” The egg is another common Dalí’s image. He connects the egg to the prenatal and intrauterine, thus using it to symbolize hope and love; it appears in The Great Masturbator and The Metamorphosis of Narcissus. The Metamorphosis of Narcissus also symbolized death and petrification.

Various other animals appear throughout his work as well: ants point to death, decay, and immense sexual desire; the snail is connected to the human head (he saw a snail on a bicycle outside Freud’s house when he first met Sigmund Freud); and locusts are a symbol of waste and fear.

The artist worked extensively in the graphic arts, producing many etchings and lithographs. While his early work in printmaking is equal in quality to his important paintings, as he grew older he would sell the rights to images but not be involved in the print production itself. In addition, a large number of fakes were produced in the 1980s and 1990s, thus further confusing the Dalí print market.