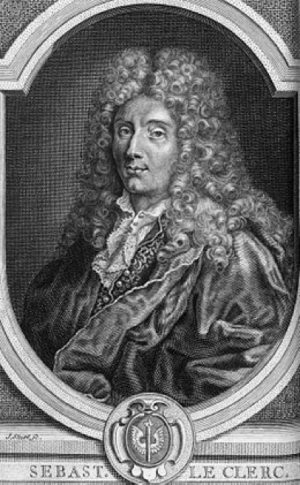 Sébastien Le Clerc (Metz 26 September 1637 — Paris 25 October 1714) was an etcher and engraver from Lorraine, who worked in Paris specializing in subtle reproductive engravings of paintings. He was made graveur du Roi and attached to the Cabinet du Roi.

Sébastien Le Clerc was the son of Laurent Le clerc, a goldsmith and merchant of Metz, who taught his precocious son the rudiments of his art. He went to Paris in 1665, pursuing interests in geometry, physics, military architecture and perspective and supporting himself by providing illustrations for booksellers, but was counselled by the King’s painter Charles Le Brun to devote himself entirely to engraving. He was accepted into the Académie royale de peinture et de sculpture in 1672 and taught perspective at the Academy school. He was appointed engraver to Louis XIV and was attached to the Gobelins. He was granted the honorific cavaliere Romano by the Pope in 1706.

His richly illustrated treatise on architecture (Paris, 1714) was translated into English by Ephraim Chambers as A treatise of architecture with remarks and observations. In a number of editions it served until the mid-eighteenth century as the only systematized and encyclopedic introduction to the decorative part of architecture, ornaments and enriched mouldings, that was available in English.

His son, a painter and draughtsman who worked for the Gobelins manufactory, is distinguished as Sébastien Le Clerc the Younger (1676-1763).