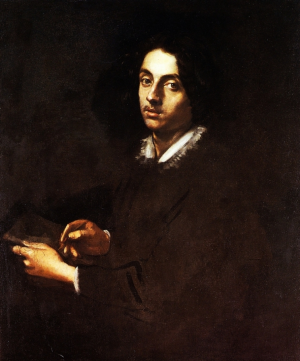 Cantarini was born in Oropezza near Pesaro, then part of the Papal States.

Initially he was a pupil of the Venetian Claudio Ridolfi and Pesarese Giovanni Giacomo Pandolfi, and then, for about four years (1635–1639), of Guido Reni. He soon fought with his mentor, and did not return to Bologna till after Reni had died (1642). His pictures are generally derivative. Some of his works have been mistaken for examples of Reni. Among his principal paintings are St. Anthony, at Cagli; the Magdalene, at Pesaro; the Transfiguration in the Brera Gallery, Milan; the Portrait of Guido, in the Bologna gallery; and St. Romuald, in the Casa Paolucci. His most celebrated etching is Jupiter, Neptune and Pluto, honoring the heraldic arms of Cardinal Borghese.

It is said that Cantarini’s death, which took place at Verona in 1648, was occasioned by the humiliation when he was fired by the duke of Mantua when he was unable to paint a portrait. Others relate that he was poisoned by a Mantuan painter whom he had injured.

Cantarini was one the most important etchers following the style of Carracci brothers, and actually perhaps he’s most important at etcher than painter. We know 37 engraving images by Cantarini in the most important Museums and Collections of the World (British Museum, MET New York, Fogg Art Museum at Harvard, Collezione Licini at Pesaro, and soon).