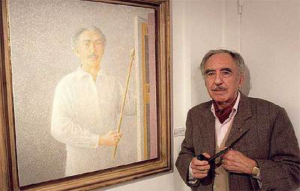 Xavier Valls Subirà (1923–2006) was a Catalan painter who lived in Paris most of his life.

His father, Magí Valls, served on the editorial board of El Matí, a Catholic Catalan newspaper.

He learned the visual arts from the Swiss sculptor Charles Collet and the Catalan painter Jaume Busquets in the 1930s.

Valls started his career as a designer for Ramon Sunyer, a jeweler. He then worked for architects Lluís Bonet Garí, Isidre Puig Boada and Francesc Folguera i Grassi as well as designer Santiago Marco.

In 1946, he was a co-founder of the Cercle Maillol at the French Institute of Barcelona with Charles Collet, Suzanne Alemany, Alfred Figueras and Bernard Sanjuan.

He moved to Paris in 1949 thanks to a scholarship from the French Institute of Barcelona, and decided to stay. By 1953, his paintings were exhibited at the Salon d’Automne. Meanwhile, he worked with Fernand Léger on stained glass designs. His work was exhibited in the art galleries of art dealers Henriette Gomès and Claude Bernard.

He was the recipient of the Prix Drouant in 1980. A year later, in 1981, the Musée Ingres in Montauban organized an exhibition solely about his work. Three years later, in 1984, the Museo de Arte Moderno in Madrid added his 1974 painting, Pêches et pichet to their collection. He became an Officer of the Ordre des Arts et des Lettres in 1989.

He published by memoir, La capsa meva Pandora in Catalan in 2003.