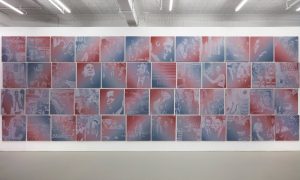 The valedictions for Barack Obama’s presidency are being prepared. Perhaps few will have the romanticism of the epic labor that New York artist Rob Pruitt has been preparing daily over the past eight years.

By the time Obama steps down on 21 January 2017, there will be some 3,000 red and blue shaded panels, each one taken from a news photograph taken of the president on each day of his administration. As has been widely noted, it’s a deliberate, joyful show, each frame successful in its own right and, in its totality, shaded by pathos at the passing of the Obama political comet.

“At the end of presidency, everybody scurries about trying to figure out what this person’s legacy will be. But I did not want to articulate those moments – the signing of healthcare act – but about what I knew from the outset – that this was a very measured, very intellectual, capable statesman that we could be proud of,” Pruitt says.

Pruitt treated the Obama Paintings as an exercise in repetition, like a catechism practice. Most mornings, with rare exceptions, he’ll wake and make a new one. They’ve been shown before, including at the Museum of Contemporary Art in Detroit, but only now with the clock running down on the presidency can we begin to see its emotional and physical expanse.

We see Obama –and the Obamas– in their element. On the stump, at the State of the Union, in contemplation, on the golf course, strolling the Rose Garden, eating crushed ice on holiday, dancing cheek-to-cheek with Michelle, in an open-neck white shirt and resembling in many ways the great soul singer Sam Cooke.

“The big moments of the administration didn’t really interest me that much,” Pruitt says. “I like imagery of the downtime, when the image is cropped so closely where you get no idea of timing and context.”

Still, Obama’s emotional clarity and a kind of defining hipness are the qualities that come through, all placed in an unspecified order to reveal a portrait of his entire presidency.

“Placing the series in chronological order would have made it too much like a film,” Pruitt points out. “I wanted each day to contribute something more akin to something a painting can conjure a world of what we already know, or might not know, with just one visual experience.”

The work, which will be offered for sale to an institution after it completion next month, fits broadly into one stream of Pruitt’s unconventional approach art production. The series is less similar to Warhol’s approach of repetition than an idea of accumulation – the idea that a work practice, like crochet, engaged day after day, week after week, can turn into something.

“Each day’s edition doesn’t seem like much but before you know it something crazy exists,” Pruitt says. The application of practice more clearly echoes On Kawara, the Japanese artist who painted the day’s date in Helvetica typeface in white on a black background. That accumulation, Pruitt says, “becomes a real container for the viewer to fill with their thoughts, feelings experience”.

With 2,994 separate components, the series still delivers surprises. The amount of imagery with Obama and Hillary Clinton is something that could hardly have been anticipated even a year earlier. More powerful, though, is the thread of the love story between the president and the first lady.

“America is always in flux and a slideshow of imagery courses through our minds, each person different,” Pruitt says. “I love the way Obama, his wife and two children changed that in such a positive way. The picture of America is better now, and that’s a big part of what this project is about and why I started it in the first place.”

But it’s impossible to discuss Obama’s presidency without acknowledging the negative forces that gathered to oppose it. For Pruitt, as others, that is encapsulated in the rise of hate groups and incorrect information that pools on the web. “We thought there was going to be some equalization that everyone would permit to speak. Right now that looks like a downside. But who knows, maybe it’s just something we have to adjust to.”

The end of the Obama project signals a series of changes, Pruitt considers. The Obama romance as it once existed will end and his successor demands new attention to a new reality, in the world and in the studio.