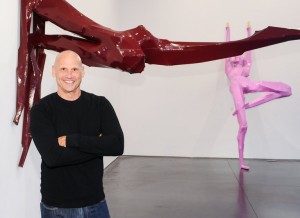 When the veteran art dealer Perry Rubenstein moved his art gallery to Los Angeles from New York four years ago, he boldly declared that Los Angeles had become the country’s most exciting art scene, and he wanted to be part of it.

Instead, Mr. Rubenstein’s life quickly collapsed: He was hit with a string of lawsuits for breach of contract; he and his wife divorced in early 2014; and his gallery filed for bankruptcy protection soon after, with prominent Los Angeles artists like Shepard Fairey and Zoe Crosher among his creditors.

Then, late Thursday night, Mr. Rubenstein, 62, was arrested on charges that he had embezzled money from art collectors whose works he was supposed to be selling. He pleaded not guilty at his arraignment. A preliminary hearing was scheduled for May 11.

The charges stem from the sale of three pieces.

In 2012, Mr. Rubenstein sold a scroll by the artist Takashi Murakami on behalf of Michael Salke, a New York art collector. But according to the criminal complaint, Mr. Rubenstein failed to turn over the entire profit from the sale to Mr. Salke.

Mr. Rubenstein also contracted to sell several works by Richard Prince, which were owned by Michael Ovitz, a former Hollywood mogul who was a founder of the talent group Creative Artists Agency before going on to serve as president of the Walt Disney Company.

Mr. Rubenstein sold two of Mr. Prince’s paintings for more than $1 million. Mr. Ovitz said he never received any proceeds and sued in 2013, accusing the dealer of acting in bad faith. The Rubenstein Gallery filed for bankruptcy protection a few months later.

Prosecutors with the Los Angeles County district attorney’s office said that Mr. Rubenstein kept the profits from the sales for himself.

Eric M. George, a lawyer for Mr. Ovitz, said to Ian Lovett in an special interview, by The New York Times, published on April 22, 2016, “Mr. Rubenstein abused the trust of multiple clients, defrauding them under the guise of selling their artworks.”

Mr. Ovitz settled his lawsuit this year, with Mr. Rubenstein agreeing to return one of the paintings, even though Mr. Rubenstein said he had not been in possession of it since the sale. A lawsuit brought by Mr. Salke has also been settled.

Alexander Rufus-Isaacs, a lawyer for Mr. Rubenstein, said his client had done nothing criminal and questioned why charges were being brought now, after the civil cases had been wrapped up.

“We’re astonished, and don’t understand why an indictment was filed,” Mr. Rufus-Isaacs said, adding that Mr. Ovitz was not paid because assets were tied up in the bankruptcy. “Perry has been completely wiped out as a result of the gallery failure“. He added that it was important to distinguish between Mr. Rubenstein and the gallery, which owes money to many people.

Mr. Rufus-Isaacs said the financial troubles stemmed from Mr. Rubenstein’s move to the West Coast, which involved the sale of his gallery in Manhattan. The 2012 opening of his new 9,500-square-foot Hollywood gallery, was attended by entertainment luminaries. But he was never able to get out from under the cost of opening that new space, which was an “expensive proposition,” Mr. Rufus-Isaacs said.