Art made in Space

Which images from our age will endure? Will they be Turner prize-winning artworks, or will they be pictures such as those taken by the European Space Agency’s Planck satellite, which launched in 2009 and over the next four years collected the first light in the universe? When we look at the stars from Earth, we are looking back in time at light that has travelled for centuries or millennia. Planck stared further and longer, to catch the light of the early universe just after the Big Bang. The oval, colour-filled and almost abstract images its data has provided show the beginning of stars, galaxies and elements. These pictures are the Sistine Chapel of the scientific age – they show us the wonder of creation.

If the purpose of art is to show the mystery and wonder of existence, nothing in our century has done that more suggestively and grandly than the startling new images of nature that science is unveiling almost every day. Astronomy is not the only scientific discipline uncovering these marvels. The eerie underwater worlds of “black smokers”– volcanic vents swarming with strange life – and close video encounters with giant squid and other deep sea creatures reveal the secrets of life on Earth.

Science has become art as never before. If astronomy has led this cultural revolution, it’s because it is the most visual of sciences. Ever since Galileo pointed a telescope at the moon and published his own drawings of what he saw in 1610, astronomy has been a science of enhanced looking.

There is no better place to visit to learn how scientific images became the great art of our time than the Royal Observatory in Greenwich, where astronomers have scanned the skies since the age of Isaac Newton. On its leafy cafe terrace, Marek Kukula, the public astronomer at the Royal Observatory, remembers the exact moment when science became contemporary art. It was 1995, and he was just starting to work with the Hubble Space Telescope. This revolutionary, unmanned orbital observatory had been launched by Nasa in 1990, but at first it had seemed a failure. “The images were blurry. Hugely embarrassing. Then the space shuttle came to the rescue and installed correcting lenses. Suddenly, these images came back and they were stunning.” 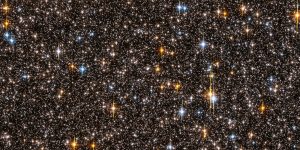 A Hubble image of nine stars orbited by planets over the period of a few days. Photograph: AFP/Getty Images

The picture that changed everything – not only making the Hubble famous, but suddenly raising the possibility that scientific data could generate art – shows the Eagle Nebula, which can be found in the constellation Serpens and is 7,000 light years from Earth. This means that it takes light, which travels at 299,792,458 metres a second, 7,000 years to reach us. Some of that light was caught by the Hubble and provided data that NASA used to release an image of three immense columns of dark cloud in a glowing green sky, a smoky, luminous vision of immensity and grandeur that has the atmosphere of a painting by Turner.

The information with which researchers are rewarded does not print out in the glorious colours and dazzling luminescence of the headline-making pictures. “It’s data. It is the numbers that you need to make a digital photograph.”

So, one reason science has become so good at making art since 1995 is that art has shaped the way scientists see. Astronomers look at a nebula and see a grandiose painting.

Is this aesthetic rush bad for science? Is truth being replaced by beauty? No, Turneresque atmospherics of shimmering light, masses of cloud, vast webs of colour – all these lovely details help us to see the true grandeur of our universe.

Great art should fill us with a new vision of the world – indeed, the cosmos – and our place in it. The last professional artists who really did that were Jackson Pollock and Mark Rothko. Today’s greatest artists will never be famous as individuals or sell their work for millions –NASA’s Hubble images are free to use – because the most beautiful images of today are being created by teams of scientists using advanced technology. The modern art world has told us that art can be anything. It took science to remind us that it can still be a picture of nature.