Mary Heilmann is remembering the day David Hockney came to teach a class at her college. “He was only a few years older than we were. He came in with his chartreuse suit, white-blond hair. The painters didn’t really want to take his class because he was so radical. But he was a great teacher – taught us all about being gay, talked about everything in his life. Years later, I was in New York with Robert Smithson, who I adored. I say: ‘Oh, I studied with David Hockney at Berkeley.’ Smithson says: ‘Ugh, I can’t believe we’re even talking about the guy.’”

In case it’s not evident, Heilmann knows a lot of people in the art world. But after years of underexposure for her work, the US artist is finally enjoying a welcome career surge in her eighth decade. Her off-kilter paintings and brightly colored chairs have been popping up in ever more exhibitions and galleries – even on the balcony of the new Whitney Museum in New York.

This attention is belated validation of Heilmann’s talents. Spend time in her light-filled studio in New York, however, and you’ll soon discover she was never out of the picture. Heilmann has been working in this downtown loft since 1977, when rampant crime and near-bankruptcy were competing for the city’s ruin, and years before the neighbourhood would be christened Tribeca and transformed into some of Manhattan’s most expensive real estate. 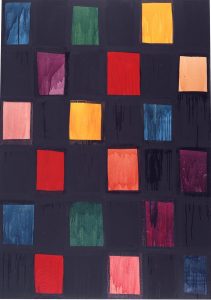 Born in San Francisco in 1940, Heilmann initially set her sights on a more exacting discipline than art. In Los Angeles, her family was members of the athletics club. While some of her fellow divers competed internationally, Heilmann gravitated to surfing. She left LA to study in Santa Barbara, because “the surfing scene in 1959 was pretty hip”. At college, she was drawn to poetry, reading Wallace Stevens and Ezra Pound. But among her crowd (“sort of late beatniks, early hippies”) there was a vogue for throwing pots and drinking tea out of handmade cups – and a pottery apprenticeship eventually pushed Heilmann into art school.

She enrolled in the sculpture department at the University of California, Berkeley – where she was one of the only women – and learned to weld steel and cast bronze. But she found it stultifying. “The teachers were so conservative,” she says. “Someone told me to head up to UC Davis, where Bruce Nauman was studying.” So she drove the hour to Davis and sought out the artist. “And we talked about Marcel Duchamp the whole time.”

Like Duchamp, who coined the phrase “bête comme un peintre” (“as dumb as a painter”), Heilmann developed a deep suspicion of pictures on canvas in the 1960s – her early sculptures were made out of the same fiberglass as a surfboard. But also like Duchamp, she harboured a secret. “I dedicatedly hated painting then,” she says.

Eager to meet Donald Judd, she came to New York and hung out at Max’s Kansas City, the Park Avenue nightclub as central to the artists of 60s New York as the Moulin Rouge was for Toulouse-Lautrec. “Of course, I couldn’t get any attention from them,” she says. “Wanting to hang out with the men and not welcoming the other girls into the game was very common. But at Max’s everybody would talk to everybody, even if they didn’t like each other. So I would tell people I was a painter, just to have a conversation, a beef. I don’t think people fight like that anymore, but then it was part of the deal. The guys would get into real fistfights.”

Heilmann’s subterfuge makes sense when you see her paintings from the 70s: slippery, knowing abstractions that embrace the challenge to painting posed by Duchamp’s ready-mades and Judd’s minimal boxes. There’s a woozy edge to her monochrome squares. Splashes of pigment defile pristine backgrounds. Stripes bleed past their borders and zigzags interrupt her regular, minimal grids.

Most winningly, Heilmann deconsecrates the supposed purity of abstract art, infusing it with colours and forms from the outside world, mainly pop music.

Heilmann’s big ideas and promiscuous use of different media have made her a hero for a new generation of painters, not least the women leading abstract American art today. Make a list of the most ambitious painters working in the US – Julie Mehretu, Laura Owens, Jacqueline Humphries, and Charline von Heyl – and it will be a while before you hit a man’s name.

Thrilled as she is by her recent success, Heilmann sometimes misses the calm of her early career. And yet she still found time to meet the whole of New York. What sounds today like namedropping is an accurate reflection of the art scene’s size then? Richard Serra really did procure her a loft. Philip Glass really did install her shower.

Today’s art world, transformed by big money, doesn’t have the same intimacy. It requires a cool head and – to use a Heilmann metaphor – an ability to surf its waves without going under. “We started out loving Duchamp’s idea of making something that wasn’t particularly seductive. But economics is a basic human instinct, and it’s pretty hard not to say, ‘Oh, everybody likes that! I’ve got to make a bunch!’ You’ve got to override that impulse.” She pauses, reconsiders, and then adds with a laugh: “Well, Andy didn’t override it.” Yes, she knew Warhol, too.