A Cosmopolitan Trove of Exotic Beauty 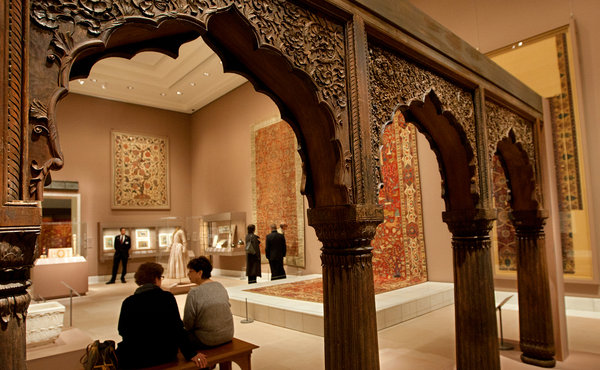 In 2003 the Islamic galleries of the Metropolitan Museum of Art closed for renovation, and one of the world’s premier collections of Islamic art more or less vanished into storage.

As of November 1st 2011 the learning can go forward. The Met’s Islamic collection returns to view in what are now being called the galleries for the Art of theArabLands,Turkey,Iran,Central Asia and Later South Asia.

The new, much expanded installation is as intelligent as it is visually resplendent. The art itself, some 1,200 works spanning more than 1,000 years, is beyond fabulous. An immense cultural vista has been restored toNew York.

As its title implies, that vista has been carefully thought out and framed. Rather than presenting Islamic art as the product of a religiously driven monoculture encompassing centuries and continents, the Met is now approaching it as a varied, changing, largely secular phenomenon, regionally rooted but absorptively cosmopolitan, affected by the intricacies and confusions of history, including the history that the art itself helped to create.

At the same time certain visual binders are evident. You see one the instant you enter the first gallery. The written word is omnipresent. Whether in the form of love poems, proverbs or passages from the Koran, calligraphy spreads like a fine net over everything, creating an art that almost literally speaks.

In the context of Islamic art, language is transferable to almost any surface, on almost any scale. And some insist that you can’t really know this art until you’ve experienced Islamic architecture: grand palaces like theAlhambra, tombs like the Taj Mahal or houses of worship like the Suleymaniye Mosque inIstanbul, all embroidered with inscriptions.

The Met galleries convey some sense of monumentality in a few long-familiar works. The great 11-foot-high mosaic-tiled 14th-century mihrab, or prayer niche, from a religious school inIsfahanis one. The intact wood-panelled reception hall known as the Damascus Room, decorated with poetic verses that have been placed in proper order with this reinstallation, is another.

Then there are carpets, portable monuments. The Met has spectacular examples. The Simonetti Carpet, woven around 1500 inCairo, is nearly 30 feet long. In dim quarters in the old Islamic galleries it was hard to appreciate. Now displayed in a high, wide room its garden-and-lawn colours — rose reds, grass greens — look tender with fresh life.

It is over all an art of intimacy; about one-on-one encounters with individual objects, more often than not quite small; and about the endlessly varied orchestration of a small number of visual motifs and mediums, and the minute felicities such variation generates. The alert eye will spot some of the motifs right away: besides the written word, there are images of stars, flowers, figures and abstract shapes, each migrating from one kind of object to another within a fixed repertory of mediums: textiles, ceramics, manuscripts, and so on.

Choose any motif or medium, and it will set you travelling.

A gallery of Ottoman Turkish art is a floral detonation, with blossoms imported fromChina,Persia,IndiaandEuropestreaming over textiles and landing on plates, helmets and the most beautiful prayer rug in the world. If glass is your passion, a line-up of mosque lamps, enamelled and translucent, fromEgyptandSyriawill be heaven.

Metalwork connoisseurs will beat a path to a 13th-century brass brazier inlaid with impossibly refined silver and copper designs, and to an astrolabe that calculates your geographic coordinates, your horoscope and the precise times for daily prayer.

If your point of reference in art is the human form, you’ll find it in manuscript paintings, the most famous being illustrations for the 16th-century edition of the “Shahnama,” or “Book of Kings,” produced under the art-obsessed and faith-obsessed Persian emperor Shah Tahmasp.

Art has always reflected what’s wrong about people as much as what’s right about them. In image after image, beauty is countered by cruelty; utopianism by power grabs.Paradisegardens and battlefields make equally desirable real estate. Yet if treasured objects almost invariably come with ethical ambiguities, one thing is certain: Those objects do keep coming, as recent arrivals attest.